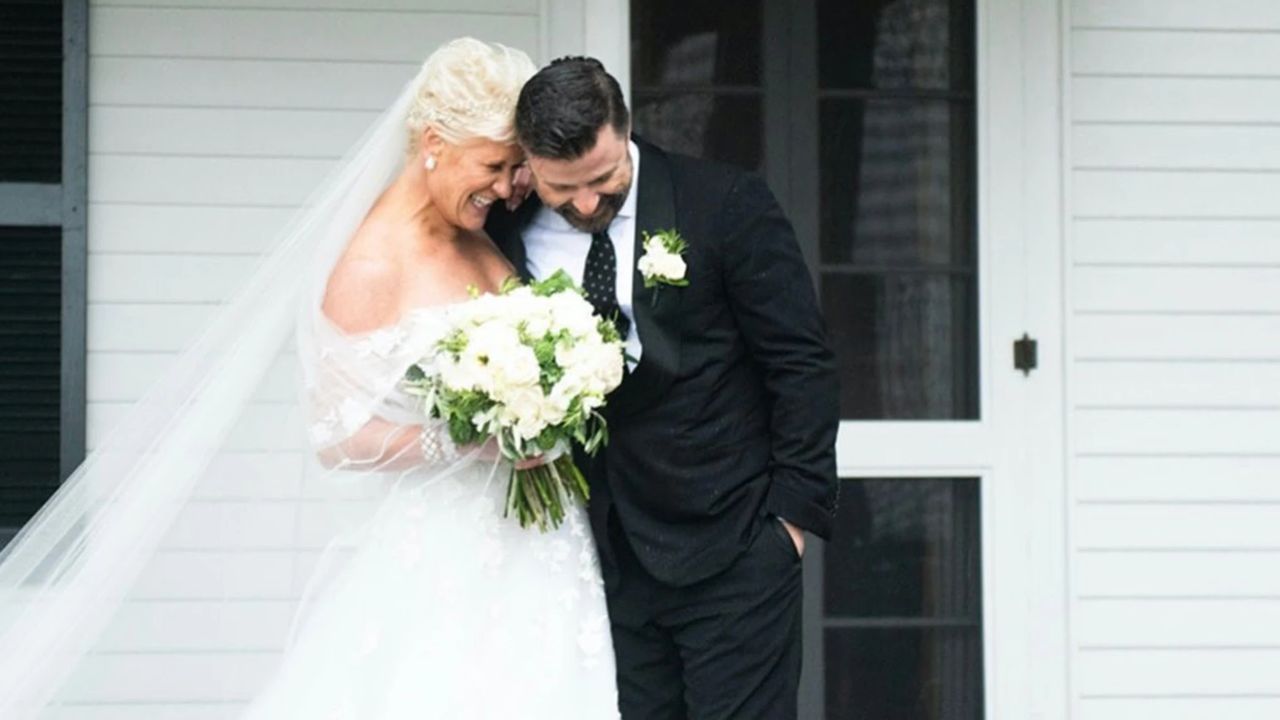 Chef Anne Burrell has been married to her husband, Stuart Claxton, since 2021. Stuart is a 52-year-old Univision ad sales marketing executive. However. the 53-year-old was gay before. In fact, she was engaged to Koren Grieveson in 2012. Follow to know more about the couple’s love story with their wedding pictures.

Anne W. Burrell (born September 21, 1969) is a former instructor at the Institute of Culinary Education, an American chef, and a television celebrity. She co-hosts Worst Cooks in America and hosts the Food Network program Secrets of a Restaurant Chef. She has also appeared on other network shows like The Best Thing I Ever Ate and was one of Mario Batali‘s sous chefs in the Iron Chef America series.

Chef Burrell, who grew up in upstate New York, became passionate about food and cooking at a young age. She attended The Culinary Institute of America after earning a degree in English and communications from Canisius College in Buffalo, New York, to pursue her interest in the food industry. Following graduation, she worked at La Taverna del Lupo in Umbria and La Bottega del’30, a one-Michelin star restaurant in Tuscany, while spending a year studying at the Italian Culinary Institute for Foreigners.

As the holidays are arriving very soon, Food Network is back with a new show titled Beat Bobby Flay: Holiday Throwdown which is, of course, about the food. And yes, Anne Burrell has also been cast in the show. Everybody knows that Anne got married in 2021, however, they’re unaware of who her husband really is. Well, let’s know about him.

Previously, we touched on the relationship status of Ros Gold-Onwude and Cris Cyborg.

Anne Burrell’s Husband: The 53-Year-Old Chef Got Married to Stuart Claxton in 2021; Stuart, 52, Is a Marketing Executive; See Their Wedding Pictures!

Chef Anne Burrell (@chefanneburrell), 53, is married to her husband, Stuart Claxton, since 2021. The couple exchanged vows on October 16, 2021, in Anne’s hometown of Cazenovia, New York, at Windridge Estates Redbarn 20. In an exclusive interview with PEOPLE before her wedding, Burrell addressed getting married after becoming engaged in April 2020 while quarantining in Cazenovia with her family and Claxton. She said,

I can’t believe it’s really here. It’s kind of surreal. We feel so much love and support from everyone who’s coming.

Four bridesmaids, including Burrell’s sister Jane and a close friend, celebrity chef Rachael Ray, escorted her down the aisle in a horse-drawn carriage. Javier, his 16-year-old son from a previous marriage, served as Claxton’s best man. You can find the wedding pictures right here. Although Burrell has never been married before, in 2012, she was engaged to another chef, Koren Grieveson. Yes, she was previously gay.

Claxton, currently 52 (that time), a Univision ad sales marketing executive, looked dapper in a black Ralph Lauren Purple Label tuxedo and orange Nike high-tops. Stuart met Anne on Bumble in 2018 and proposed to her in April 2020 in New York while she was quarantined with her family.

The couple also celebrated a memorable Valentine’s Day in 2022. Burrell posted a touching note to Claxton along with a photo of the couple from their wedding on Instagram. She wrote:

The happiest first Valentine’s Day to my Prince Charming @stuartclaxton as a married couple!! You make me the happiest girl in the world!!! I love you to the moon and back my sweet!!!

Reports suggest that Anne Burrell has an estimated net worth of $6 million. She has other businesses, but her television profession on Food Network provides the majority of her income.

Throughout her career, Anne Burrell held positions at a number of eateries, including Centro Vinoteca, Savoy, and Felidia. She also founded her own eatery, Phil and Anne’s Good Time Lounge. One of Anne Burrell’s accomplishments is her co-hosting of the television program Worst Cooks in America with other well-known chefs including Bobby Flay and Carla Hall.

She began her career in the culinary industry by working at a number of restaurants in Italy before coming back to the United States to work at the renowned Felida restaurant. At Centro Vinoteca in New York City, Anne Burrell started her first career as an executive chef in 2007. Food Network’s reality series Worst Cooks in America debuted in 2010. Every season so far has been hosted by Anne Burrell, who also frequently invites other celebrity chefs to the program.

She achieved her dream of operating a restaurant in 2017 and gave it the name Phil & Anne’s Good Time Lounge. 2018 saw the closure of the restaurant, but Anne Burrell’s career was far from ended. With Worst Cooks in America and other Food Network programs, she was still successful.