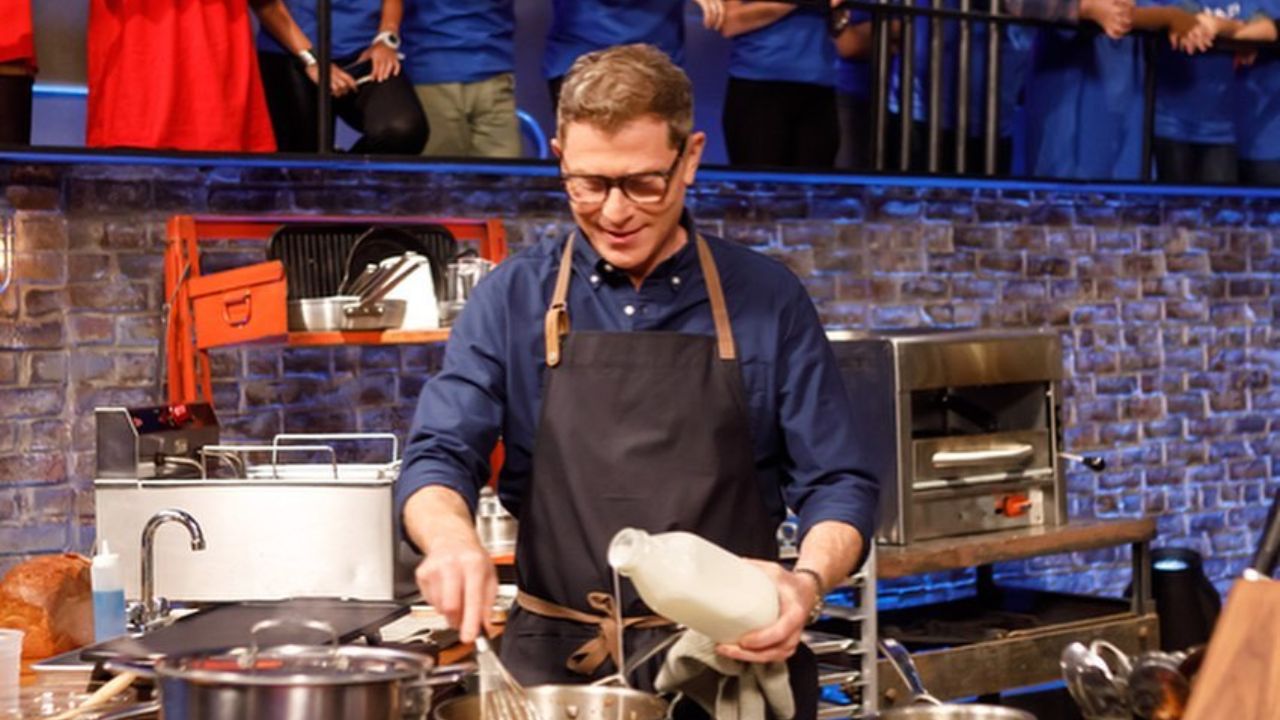 Bobby Flay is reported to have accumulated a net worth of $60 million till now in 2022. The chef has a long television career hosting numerous cooking shows mostly on Food Network and authored several cookbooks that have sold really well. Bobby Flay is also a restaurateur who has opened several restaurants in countless locations, all of which have contributed to his impressive net worth.

Bobby Flay is an American celebrity chef, restaurateur, and reality television personality who is someone that comes into your mind as soon as you hear someone say Food Network. He has worked with Food Network since 1995 and hosted a plethora of cooking shows that he might as well be synonymous with the network.

The chef's television career of hosting the cooking reality shows has won him four Daytime Emmy Awards and he has also earned a star on the Hollywood Walk of Fame. He also owns and serves as an executive chef of several restaurants and franchises, like Bobby's Burger Palace and the Mesa Grill.

Bobby Flay is a fourth-generation Irish American who was born on December 10, 1964, in New York City to Bill and Dorothy Barbara Flay. He was brought up in the Upper East Side neighborhood of Manhattan and raised Catholic.

The success story of the celebrity chef and restaurateur Bobby Flay is much enjoyed as it appears to contain the classic rags-to-riches element in a manner of speaking. Coming from a humble background to rise to being one of the richest chefs in the world is no small feat. Though that does make people wonder how much has he earned and what is his net worth. It does not take a genius to tell that whatever his net worth is, it would make your jaw drop but how much is it really? Let's find out!

Bobby Flay (@bobbyflay) is estimated to have amassed a net worth of $60 million to this date in 2022 from his starting days. So, when was the start of his career that turned his life upside-down?

Well, when he was 17, he dropped out of high school, abandoned his academics, and instead started taking up jobs. His first job happened to be in the restaurant industry- a pizza parlor and Baskin-Robbins. Looks like he was destined to be in the culinary world. A destiny that he followed subconsciously or maybe consciously when he took a position making salads at Joe Allen Restaurant in Manhattan's Theater District, where his father was a partner.

It was there that the future chef was 'discovered' when the proprietor Joe Allen saw and was impressed by Flay's natural culinary ability which he thought should be refined and thus, paid for his tuition at the French Culinary Institute.

Making the most out of this generous assistance, after he received a degree in culinary arts (he was a member of the first graduating class of the institute), he immediately started working as a sous-chef and began his official cooking career. He quickly got the executive chef position when he was offered it at the Brighton Grill after they fired the previous person. But he stepped down after realizing that he was not yet capable of running the kitchen and took the position of chef at Bud and Jams. The restaurateur there Jonathan Waxman introduced him to southwestern and Cajun cuisine, which came to define his culinary career.

Bobby Flay started associating with many restaurateurs and then himself became one after he served as an executive chef at Miracle Grill in the East Village from 1988 to 1990. He was hired by Jerome Kretchmer, who was looking for a southwestern-style chef, at Mesa Grill, a restaurant where he became a partner shortly after.

In November 1993, he opened Bolo Bar & Restaurant in the Flatiron District, just a few blocks away from Mesa Grill with Laurence Kretchmer. In 2004, he opened a second Mesa Grill at Caesars Palace in Las Vegas. Next year, he launched Bar Americain, an American Brasserie, in Midtown Manhattan.

Bobby Flay continued opening and expanding his restaurants. He established Bobby Flay Steak in the Borgata Hotel Casino & Spa in Atlantic City, New Jersey, and opened a third Mesa Grill in the Bahamas, located in The Cove at Atlantis Paradise Island.

Bobby's Burger Palace (BBP), he established in 2008 in Lake Grove, Long Island, followed it with a second location in 2008 at the Monmouth Mall in Eatontown, New Jersey, and the third one in 2009 in The Outlets at Bergen Town Center in Paramus. This burger chain of his is probably his only restaurant with the most outlets. In total, BBP has 19 outlets in 11 states and the District of Columbia.

Meanwhile, as he was enjoying his success as a restauranteur, Bobby Flay had also branched out to television- credit to his fame. He first entered the culinary-entertainment industry in 1994 when he competed in Iron Chef America. After that, his television career took off like his career in restaurant development. He half took shelter in Food Network seeing as he was always on the channel hosting some show. He earned the nickname Iron Chef Flay because of his frequent appearances on the Food Network's cooking show.

The restauranteur also did shows like Throwdown! with Bobby Flay where he tried to best the best cooks at their own specialties. He also mentored and judged aspiring cooks in shows like The Next Food Network Star, Worst Cooks in America, and Bobby's Dinner Battle. Other shows he did are The Main Ingredient with Bobby Flay, Beat Bobby Flay, The Bobby And Damaris Show, Brunch @ Bobby's, etc. Altogether, he has hosted sixteen cooking shows and specials on Food Network and Cooking Channel.

Not to forget, he has authored several cookbooks too many and too long to list which did well and we can assume had a hand in making him one of the richest chefs in the world.

Following his career, one can only be impressed and hardly be surprised when his net worth is reported to be $60 million. With his many booming restaurants (despite the fact that he was forced to close the original Mesa Grill and Bolo when the restaurants lost their leases in 2013 and 2007, respectively), and about 13 cookbooks he has written and sold well, plus his long television career hosting the cooking reality shows, mostly on Food Network, he has reached the top of his field.

Before you leave, check out the net worth of Jet Tila and Anne Burrell.