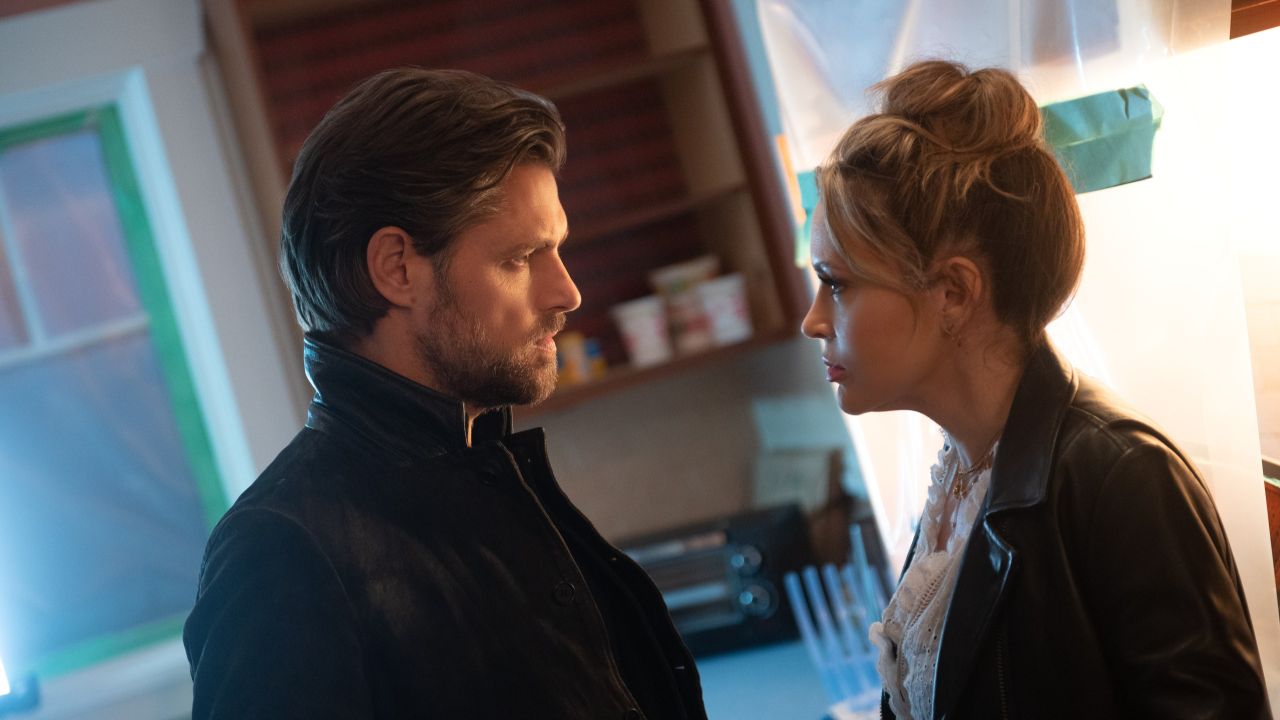 Brazen is a murder mystery movie on Netflix based on the novel Brazen Virtue written by Nora Roberts. Directed by Monika Mitchell, the Netflix movie tells the story of a celebrity author Grace, who is popular for her crime novels, investigating the murder case of her sister Kathleen.

The film was released on Netflix on January 13, 2022. Without further ado, let’s get to know each cast member.

Alyssa Milano, currently the subject of weight gain, plays the lead role in Brazen. She plays Grace Miller, a popular author of murder mystery who faces a real-life murder mystery of her sister.

Alyssa is an American actress, singer, author, and activist, who is best known as Samantha Micelli in Who’s the Boss? The 49-year-old actress made her film debut in 1984 in Old Enough, and she’s had a long career since then.

Some of the other works she is known for are Melrose Place, Charmed, My Name Is Earl, Mistresses, Wet Hot American Summer: 10 Years Later, and  Netflix’s Insatiable. She has also produced a teen workout video Teen Steam but she left her music career at that.

She has also graced the cover of several magazines like Cosmopolitan, Seventeen, Maxim. In 2017, she posted a message on Twitter encouraging survivors of sexual harassment and assault to post #metoo as a status update, which launched into the Me Too movement.

You may want to check out Alyssa’s best friend.

Emilie Ullerup plays Kathleen, Grace’s sister on Brazen who is living a double life and is murdered.

Emilie Ullerup is a Danish actress who is mostly recognized for playing Ashley Magnus on the television series Sanctuary and Bree O’Brien on the Hallmark Channel drama series Chesapeake Shores.

She made her debut as Julia Brynn on the remake television series of Battlestar Galactica in 2006. She has played a recurring role as Dale Travers in Hallmark’s Signed, Sealed, Delivered movies series.

In 2009, she did surgery to remove the tumor wrapped around her spinal nerves. She is married to her longtime boyfriend photographer Kyle Cassie.

Sam is an American actor who has worked in numerous television series including Mad Men, Desperate Housewives, House of Cards, Switched at Birth, Scandal, Unbreakable Kimmy Schmidt, Gossip Girl, and The Bold Type.

The Brazen alum guest-starred in The CW’s Gossip Girl Season 4 as Colin Forrester in 2010. He has starred in a couple of Hallmark movies Royal New Year’s Eve and The Story of Us.

He received a Bachelor in Arts Degree in ecology and evolutionary biology in 1998 from Princeton University. He is married to Cassidy Boesch with three children Logan, Annabelle, and Evie.

Malachi Weir plays Ben, Ed‘s partner who he convinces to handle the case of Kathleen.

Malachi is an American actor who is most noted for his work in The Tick, Billions, and Wisdom of the Crowd. He has also appeared in movies like What Maisie Knew, Extremely Loud and Incredibly Close, The Sight, and many more.

David Lewis portrays the role of Jonathan Breezewood, Kathleen‘s estranged husband who becomes the prime suspect after her murder.

David is a Canadian actor who is mostly known as Kevin Mitchum on the PAX series Hope Island. Ha has starred in Lake Placid as Walt Lawson in 1998. He has also appeared in The Butterfly Effect 2, Harper’s Island, Icarus.

Some of his noted roles he did in White Chicks, A Fairly Odd Movie: Grow Up, Timmy Turner, Dirk Gently’s Holistic Detective Agency, and Child’s Play. The 45-year-old has acting credits in almost 100 movies and shows.

Daniel Diemer plays Rand Morgan, one of Kathleen‘s students on Brazen, who is framed for her murder by the real culprit.

Daniel is a Canadian actor who started to be widely recognized after he played the role of Paul Munsky in Netflix’s film The Half of It. He studied Acting for Film and Theatre Program at Victoria Academy of Dramatic Arts.

He played a recurring role in Sacred Lies for four seasons. Following that, he worked in movies like Emma Fielding: More Bitter Than Death and Family Pictures.

Matthew is a Canadian actor who is known for his portrayal of Bart in Frankie Drake Mysteries. He graduated from the prestigious George Brown Theatre School.

He recently appeared as Mercutio in Old Flame Brewing Co.’s sold-out acoustic adaptation of Romeo & Juliet. He has also appeared in Workin Moms and The Terror.

Besides them, the supporting cast on Brazen includes Barry W. Levy as Paul Morgan, Colleen Wheeler as Senator Baxter, Lossen Chambers as Stacey White, and Alison Araya as Captain Rivera.