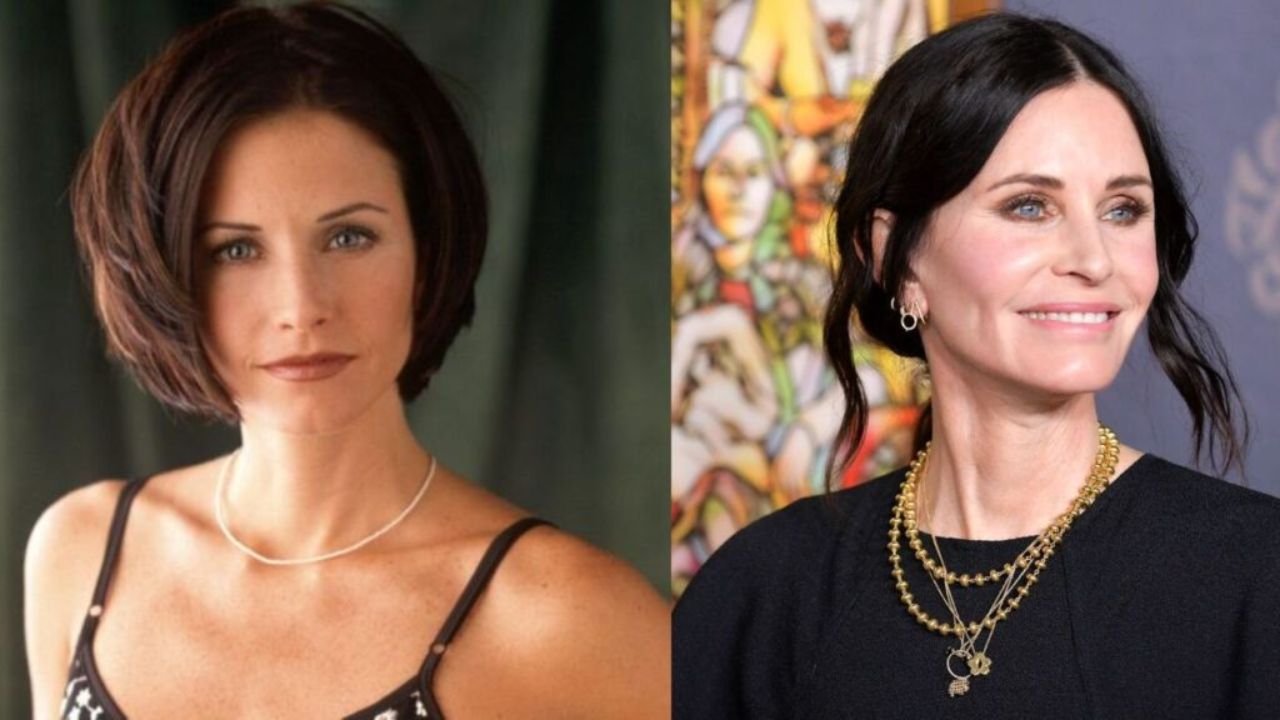 Courteney Cox’s plastic surgery face is something she regrets now. The Friends star began getting injectable fillers shortly after Friends ended which made her look not like herself and fake. Courteney Cox was unable to avoid that plastic surgery face in pictures after which she dissolved the fillers. Now the actress looks more natural and different in her recent photos.

Courteney Cox is an American actress, director, and producer who gained international recognition after starring in the role of Monica Geller on the NBC sitcom Friends, which aired from 1994 to 2004 and went on to be the greatest sitcom of all time. She got nominated for seven Screen Actors Guild Awards seven times for her performance in the show, out of which she won one.

Besides playing Monica on Friends, she also starred as Lauren Miller in the NBC sitcom Family Ties, Lucy Spiller in the FX drama series Dirt, and Jules Cobb in the ABC/TBS sitcom Cougar Town. For Cougar Town, she earned nominations at the Golden Globe Awards and the Critics’ Choice Awards.

Courteney Cox played the role of Gale Weathers in the horror slasher film franchise Screams which got her further recognition. She has dabbled in every genre there is. Her filmography includes the action fantasy Masters of the Universe, the comedy Ace Ventura: Pet Detective, the animated comedy Barnyard, the fantasy comedy Bedtime Stories, and the independent drama Mothers and Daughters.

The actress has her own production company called Coquette Productions, which she created with her then-husband, David Arquette. She has also directed her sitcom Cougar Town, the television drama film TalhotBlond, and the black comedy-drama film Just Before I Go.

Courteney Cox most recently confirmed her return in the Scream sequel as Gale Weathers and teased the role. She also launched Homecourt, a brand of surface cleaner and dish soap (how Monica of her!). With all this, she has been much exposed which has shifted people’s attention to her face, or as they like to call it plastic surgery face.

Previously, we touched on the plastic surgery efforts of Mary Magdalene and Megan Fox.

Courteney Cox (@courteneycoxofficial), with the amount of exposure she is getting right now for multiple things all at once, has sparked discussions about her plastic surgery. They are not speculations though because she has already confirmed the procedures she has gotten done. They are more about how she used to look after getting all that work done, her plastic surgery face, and how she looks different in her recent photos of 2022.

The actress didn’t age very gracefully as everyone noticed when her face started changing and looking not like hers. Turns out Courteney Cox had begun to get injectable fillers not long after Friends ended because she wasn’t pleased with herself and the way she looked. And the fact that she was one of the most popular actresses in Hollywood didn’t help.

In fact, the Cougar Town actor has spoken about how Hollywood has made it harder. Because she grew up thinking appearance was the most important thing and that as long as she looked okay, she would be okay, as soon as she started to age, she tried to keep up with time in a way that was anything other than maintenance, which made things worse for her because she went on to not like her plastic surgery face.

In 2016, Courteney Cox opened up about why she chose to have plastic surgery to Bear Grylls in an episode of Running Wild With Bear Grylls. She explained that she didn’t take aging too well which drove her towards taking the aid of cosmetic surgery. She told,

“I think there’s a pressure to maintain [your looks], not just because of fame, but just, you know, being a woman in this business. Getting older has not been … I don’t think it’s the easiest thing. I think I was trying to keep up with getting older, trying to chase that … it’s something you can’t keep up with.”

The process of getting facial fillers by aging was a gradual one and she thought she was being subtle about it. But there was nothing subtle about her plastic surgery face which she later realized. She talked about the time she started getting fillers and how she kept going back to it.

What happened was Courteney Cox went to a doctor who said stuff like she looked great but a little injection here and filler there could be of great help. So, with the doctor’s suggestions, she got fillers which no one noticed which made her think that it was good. Pretty soon, she started hearing about another doctor. And the next thing she knew was that she was layered and layered and more layered. She thought that it had been gradual until she started noticing the fillers on her face which didn’t feel right.

Even her friends thought she had gone overboard. Courteney Cox also examined her photos which led her to believe that it was worse in pictures than in real life. After that, she began to regret getting plastic surgery.

The Friends star then also shared the regrets she had about going the way of plastic surgery. About the facial fillers she has had, she said that those are the things she had done that she regrets but luckily for her because that has not been her best look- that plastic surgery face, they are things that dissolve and go away.

The next year saw Courteney Cox dissolving her regrets away. In an interview with New Beauty, she opened up like never before about her idea of beauty and how it got her into trouble because it was not the right one. After realizing that fillers had ruined her face and look more than it helped, she ditched her plastic surgery face for a natural one by having all the fillers dissolved.

After doing that, the Ace Ventura actress felt much better as she started looking more like herself. She was now fine with the ‘things changing and everything dropping.’ If she tried to stop that, she would look fake so she accepted that fillers are not her friend.

Courteney Cox would never do such stuff now because all she has gotten after trying to chase youthfulness was that plastic surgery face in the name of results, which was very regrettable.

Now, she has embraced natural aging. She said,

“There’s nothing wrong with being 60, I just can’t believe it. Time goes so fast. There’s no question that I am more grounded, I’ve learnt so much in my life — what to enjoy, what to try to do more of, and what to let go of.”

Before you leave, check out Jennifer Aniston’s cosmetic enhancements.