Do They Find Gonker in Dog Gone? What Happens to the Lost Dog in the Movie? Ending Explained! 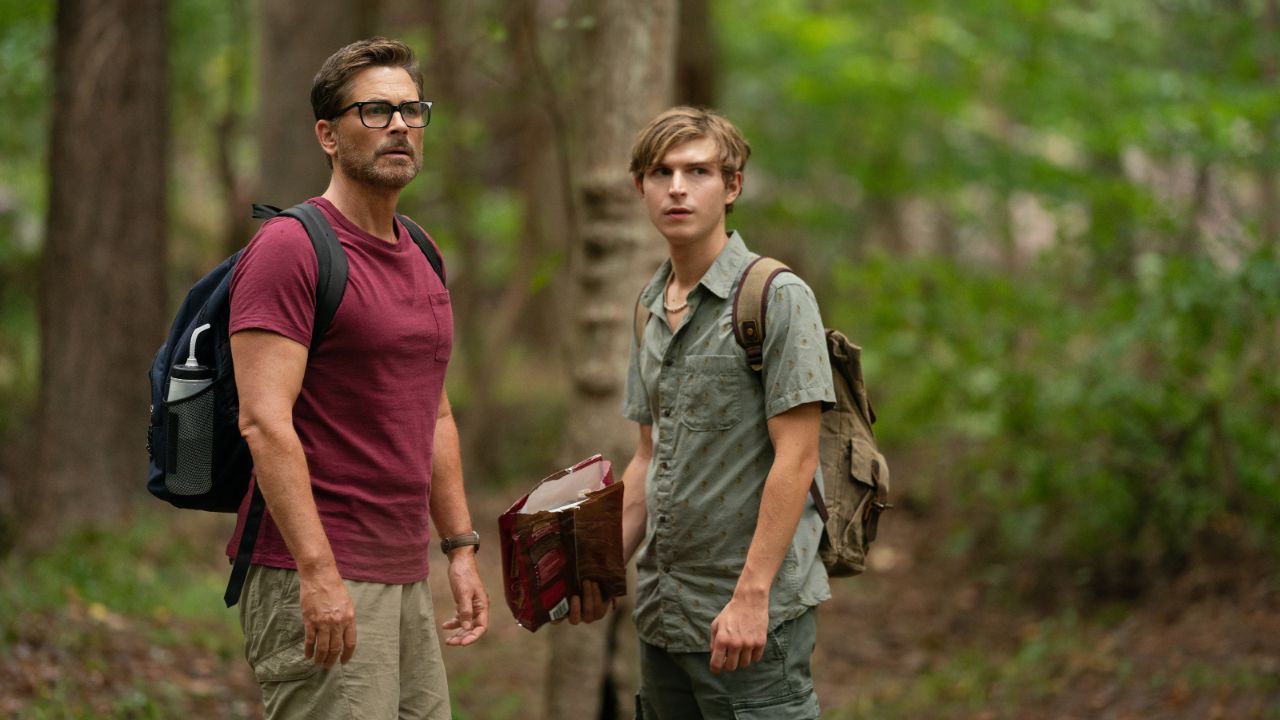 Do they find Gonker in Dog Gone? Or does the dog die? Well, don’t worry about that because Gonker is finally rescued. The Marshalls finally reunite with their beloved pet before his 20 days are up. After several days (which must have seemed years for Fielding) of searching for their pet, he is found eating trash some 111 miles away from where he was lost. Dog Gone has a happy ending.

The center of Netflix‘s new dog drama Dog Gone is the yellow labrador who gets separated from its owner Fielding Marshall when it runs off into the forest to chase a fox and gets lost. The movie focuses on the journey that Fielding and his father go on to search for their beloved furry friend they call Gonker who had been recently diagnosed with Addison’s disease which means that he needs monthly medication to survive. The time constraint they have to save the dog coupled with Fielding’s health crisis builds up anxiety and anticipation among the viewers. And they can’t just wait. The viewers need to know – Do the Marshalls find Gonker in Dog Gone? Do they find the dog or does it die? Let’s find out!

Do They Find Gonker in Dog Gone? Do They Find the Dog? Or Does He Die? The Movie’s Ending Explained!

In Dog Gone, Fielding Marshall gets a dog to help himself cope with a breakup and ends up forming an inseparable bond with a yellow labrador he names Gonker. He raises Gonker himself in the university and his parents are not too pleased about it, seeing that he does not even have a job and the dog seems to be an inconvenience. However, the dog manages to charm the parents after Fielding finishes college and goes back to his home. They warm up to him and everything seems picture-perfect for a while. Sure, there’s a strain in the relationship between the father and the son but other than that.

The movie’s called Dog Gone and it couldn’t get clearer than that the dog will be gone. Gonker gets lost when he runs off into the wood to chase a fox in the Appalachian Trails and he doesn’t come back. Oh, and did I mention that the labrador had recently gotten diagnosed with Addison’s disease which meant that he needed medications on a monthly basis to survive? So, he must be found and he must be found within 20 days because that’s when he needs the next medication and in case he doesn’t, he’s going to die. So, the time constraint they have only built anticipation and anxiety on the viewers’ part. Do they find Gonker in Dog Gone? How does it end?

It could end in two ways. Either they find the dog before 20 days are up or they don’t and he dies. Is it a Dog Gone and Found movie or a Dog Gone and Forever Lost movie? Does it have a happy ending where they find Gonker and save him or is it one of those movies that’s more of a life lesson about how life must go on no matter what happens and even if your pet gets lost and dies? Which one is it?

Well, thankfully, it’s the first one with a happy ending. Do they find Gonker in Dog Gone? Oh, be relieved ’cause yeah, they do. The furry labrador gets rescued in time for him to be saved. He really scared the life out of the Marshall family when he ran off into the woods and got lost. But they were able to rescue him in time and all was well after that.

Their hard work paid off in the end. The Marshalls had left no stone unturned to find their beloved Gonker. They get the numbers of all the big and important locations in all counties like animal hospitals, police stations, dog pounds, and more to get in touch with them when necessary. They check in with all places with large crowds hoping some of them might have seen him like churches and clubs. They also print a missing poster for the dog. At this point, everyone in the county is on the lookout for a brilliant yellow labrador, the Marshalls’ precious Gonker.

It would have been very disappointing if they didn’t find Gonker after doing everything on their part. They had handed out pamphlets to everyone in the county and they checked every animal shelter as well. Fielding and his father also form a rescue team and go searching for the Dog Gone. The former spreads the word on social media. And the father-son duo go tracking their pet exploring the Appalachian Trails where he got lost. They search by day and rest in motels by night.

And finally, they receive a phone call from a local shelter that has found a labrador with Addison’s disease. Their hopes are up and the viewers’ are too. But is it the ending? Do they find Gonker now? It seems so easy. Well, not really, with all the efforts they have put in. But it’s a movie. There has to be something coming. And there is. And it’s not Gonker. No, they do not find the dog then. It turns out to be some other dog.

John and Fielding get a call from Ginny saying that a local shelter has found a labrador with Addison’s disease. However, when they reach there it turns out to be some other dog. They are extremely disappointed and more worried than ever at this point. They begin to lose all hope and think that the dog’s gone forever because they have over a hundred people looking for him, yet he is nowhere to be found.

On top of that, Fielding’s stomach pain gets worse and he’s unable to hide it anymore. When his sister urges him to talk about his deteriorating health to his parents, he’s just about to do it when another call interrupts him. And this time, it’s Gonker. The dog gone has finally been found at the Evergreen Lodge in Nellysford. He has been eating out of their trash 111 miles away and doing some tricks with doughnuts. The father-son duo rushes out there and finally, they are reunited with their beloved Gonker.