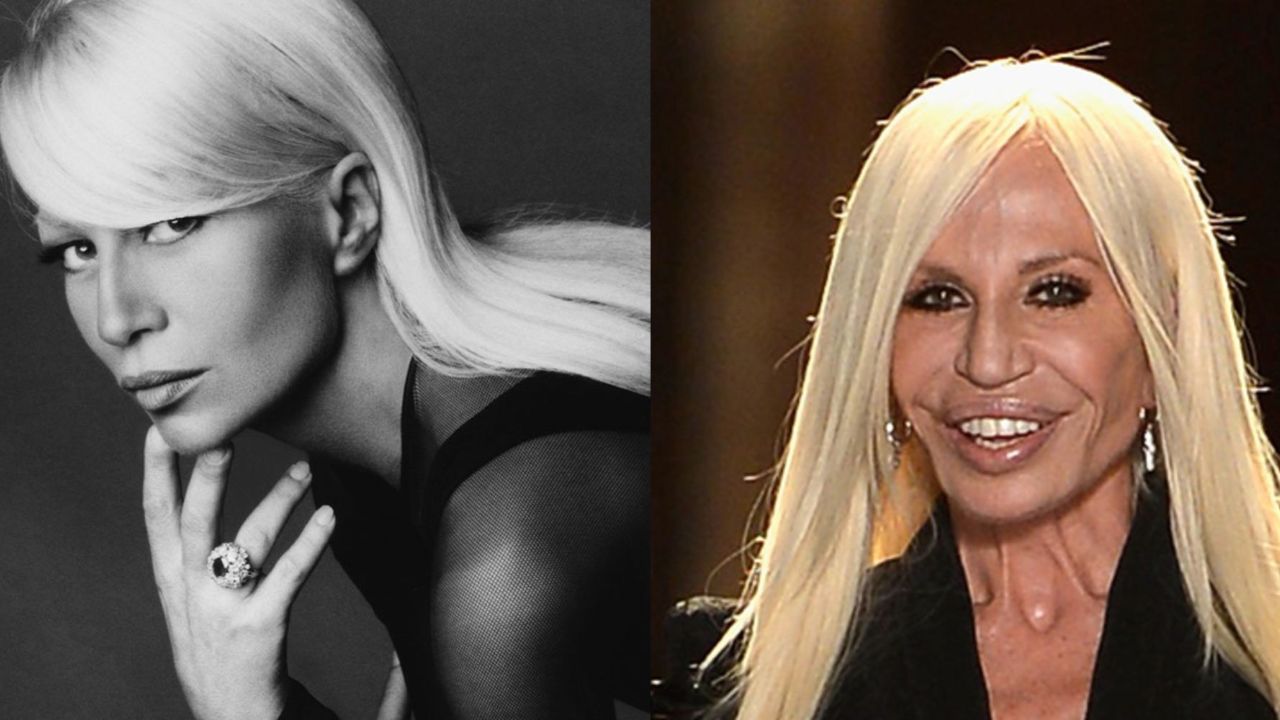 Fans wonder about Donatella Versace before plastic surgery since the cosmetic alteration on her face has gone wrong. An icon and legend, Donatella Versace is the name and face of luxury fashion. As fashionable and emblematic as she is, Donatella’s plastic surgery is always a hot topic. Spellbindingly beautiful in her youth, Donatella looks almost unrecognizable now. Here’s all about what she did and how she looked before the blades and fillers.

Redefining the world of fashion with a label that will for times to come, Donatella Versace is a name that needs no introduction. Building an empire that screams luxury in fashion alongside her brother Gianni Versace, Donatella is a fashion designer, businesswoman, socialite, and model as well. Evolving Versace as a brand that blends Italian luxury with pop culture and celebrity, Donatella is largely credited with introducing the Supermodel craze by casting magazine models on the runway in the 1990s.

Looking back on Donatella Versace’s history, she was born in Reggio di Calabria, Italy, the youngest of her 4 siblings. Donatella went to Florence to study literature and languages. She commuted to Milan on weekends to work with Gianni, who worked at the Callaghan fashion company. While her mother didn’t approve of her involvement in fashion, it didn’t stop the diva to build an empire in luxury fashion.

Being an icon of luxury fashion, Donatella Versace cannot escape the hawkeyes of the people. Basically called a human wax work, there’s no doubt that the chief creative officer of Versace has gone under the knives number of times. The curiosity still remains; How did Donatella Versace look before all the surgeries and what did she exactly get done? So, here are all the answers to your questions about Donatella Versace’s plastic surgery.

Previously, we touched on the plastic surgery efforts of Heidi Montag and Behind The Candelabra.

Donatella Versace’s Plastic Surgery: How Did She Look Before All the Blades and Syringes Touched Her Face?

Being a fashion icon is hard when you have to live and breathe fashion, perfection, beauty, and aesthetics on every step and every day of your life. The eyes of the people, the cameras, and the spotlight never leave your side. All these really drove Donatella to the point where she chose to reform her face over and over again. It’s quite evident that Lady Versace has gotten plastic surgery and she has actually gotten quite the procedures done.

Looking back at Donatella Versace’s pictures when she was young, she looks absolutely breathtakingly gorgeous and very much different from how she looks now.  Completely changing her look into plastic, many surgeons and cosmetic critics claim that Donatella has botched her face.

Currently 67 years old, Donatella has had innumerable cosmetic surgeries done. According to Dr. Steve Fallek, a well-known Hollywood plastic surgeon, she’s very much had it all; Botox, fillers, and lasers for the skin. There is the minimal recovery time for those, while laser therapy can cause some skin redness for a few weeks. He also speculated that she may have undergone a facelift, eyes, and brow lift.

Donatella’s skin looks quite glossy which is an indication of too much Botox and laser resurfacing used to smooth the face. Many surgeons also believe she has bone loss in her lower jaw, therefore an implant may have been used which made her face look weird in a way.

One of the most influential women in history, the pressure of having to be perfect drove Donatella to the point where she looks like she was molded with wax. Botox, fillers, laser, jawline surgery, blepharoplasty, and facelift, Donatella Versace has had it all and that too numerous times.

Donatella Versace and Her Million-Dollar Empire: Here’s How She Did It!

Donatella Versace has been the artistic director of the Versace empire since her brother Gianni’s death. The Italian designer oversaw the luxury company Versace’s general growth as well as several expansion plans into other enterprises such as decor, hotels, and accessories. Since 2018, she has reportedly made at least $800,000 per year from her luxury lifestyle brand.

After Michael Kors Holdings purchased the company in 2018, the brand was rebranded as Capri Holdings. Despite the fact that the brand has been rebranded and is now owned by Michael Kors Holdings, Donatella Versace continues to serve as artistic director and vice president of the board, overseeing the overall vision of the house from catwalk collections to brand image when it comes to global growth as well as the brand’s future in the digitized world.

Donatella was promoted to artistic director of the Versace Group shortly after Gianni’s death, and the estate of Gianna was inherited by their family, with 30% going to their brother Santo, 20% going to Donatella, and the remaining 50% going to Donatella’s daughter Allegra, who only got it when she turned 18.

Donatella was able to design some commercial campaigns for Versace as the company’s chief, including Madonna, Cristina Aguilera, Demi Moore, Courtney Love, Lady Gaga, Beyonce, Nicki Minaj, and several others. She even created the perfect green Versace dress for Jennifer Lopez called Jungle Dress, which she wore to the 42nd Grammy Awards in 2000.

Michael Kors announced that they have reached an agreement with Versace to buy the firm outright for $2.2 billion on September 25, 2018. Donatella got roughly $440,000 after selling her 20% ownership in the company in this maneuver. The Versace family still holds around $176 million in company equity.

Donatella will remain the company’s, chairman and chief executive officer, according to the acquisition deal. This is a win-win situation for both companies because Donatella can continue to run the company while Michael Kors Holdings receives annual money from the brand. Versace’s annual revenue is believed to be in the range of $800,000. This is how Donatella built an empire worth millions still maintaining the originality and the iconic name of Versace.