Elvis Presley’s Weight Gain: Is It Due to Drug Abuse or Excessive Eating; The Cause of The Death of The King of Rock and Roll Revealed! 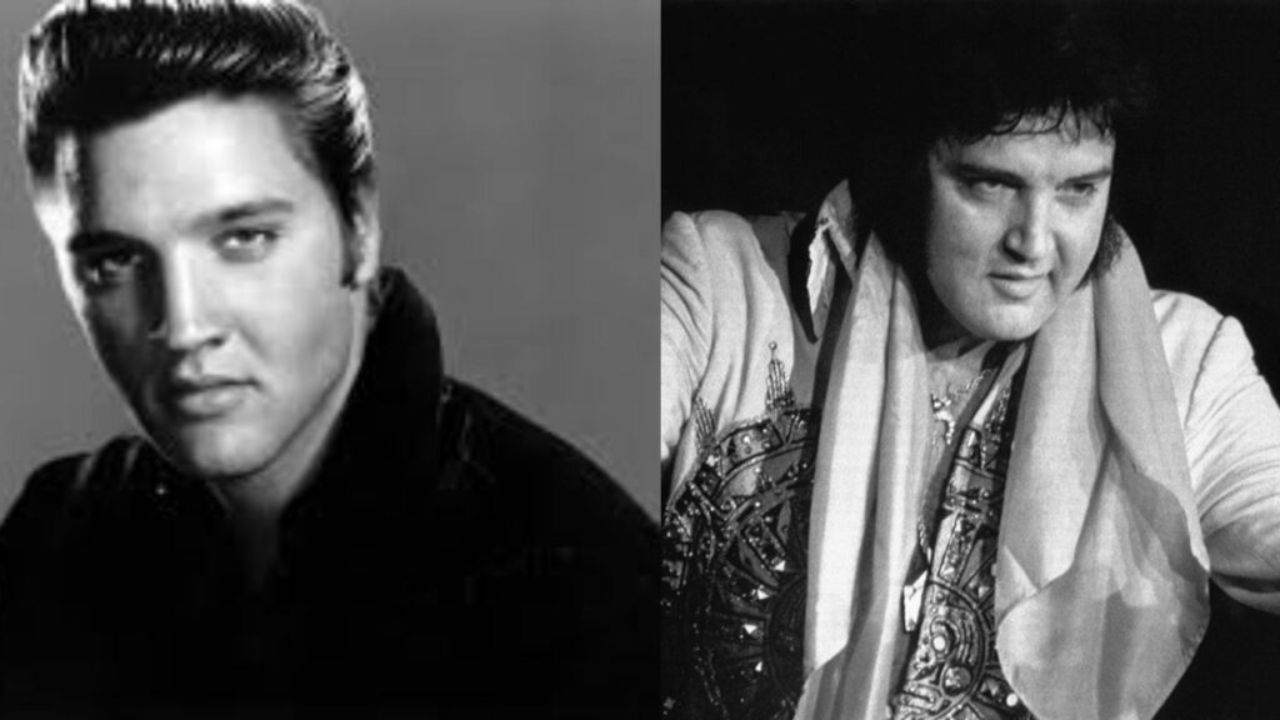 Elvis Presley’s weight gain in the final days of his life is something people still remember with horror more than four decades after his death. People have several theories about what caused the King’s weight gain. Some believe Elvis Presley gained weight due to drug abuse and he was not as fat as looked bloated and swollen due to water retention, while others are convinced that weight gain is due to his gluttony as he always kept eating deserts with the highest calories.

Elvis Presley was an American singer and actor who is regarded as one of the most significant cultural icons of the 20th century. He has been dubbed the King of Rock and Roll.  He started his music career in 1954 at Sun Records with producer Sam Philips.

Under the influence of Sam who wanted to bring the sound of African-American music to a wider audience, Presley with his rhythm acoustic guitar went on to become a pioneer of an uptempo, backbeat-driven fusion of country music and rhythm and blues. Within a year of the release of his first single Heartbreak Hotel in 1956, he sold a million copies of it, and with a series of chart-topping records, became the leading figure of the new sound of rock and roll.

Elvis Presley is recognized as the best-selling solo music artist of all time by Guinness World Records after he sold over 500 million records worldwide. He holds the records for the most RIAA certified gold and platinum albums, the most albums charted on the Billboard 200, the most number-one albums by a solo artist on the UK Albums Chart, and the most number-one singles by any act on the UK Singles Chart.

He has made music in multiple genres and became commercially successful at all including pop, country, R&B, adult contemporary, and gospel. He has been inducted into multiple halls of fame. He has won three Grammy Awards and he was also honored with the Grammy Lifetime Achievement Award at just 36. He was also posthumously awarded the Presidential Medal of Freedom in 2018 by Donald Trump.

Elvis Presley, at the prime of his career, was not appreciated for his sound and music but he was equally loved and praised for his fashion sense, style, and overall looks. His looks, he was unable to maintain in the final years of his life. He had a significant weight gain which made him unrecognizable. Now, even after his death, when people remember him, they remember how bloated he had been because of the weight gain in the years leading to the end of his life.

Previously, we touched on the weight gain stories of Beyonce and Colton Haynes.

Elvis Presley’s Weight Gain: The Reason Behind The King’s Looks In The Days Before His Death!

Elvis Presley was not just a musical icon but he was also a sex symbol in his time. He was widely acknowledged and noted for his physical attractiveness and sexual appeal. He looked like a dream both onstage and off and all the time but toward the end of his life, his looks faded very quickly because of the weight gain. He lost the very appearance that defined him and that the world has come to know as the King of Rock and Roll. So, even after more than four decades of his death, while people look back at his legacy, they still remember with horror how he looked after the weight gain.

It was a tragic moment for all when at just the age of 42, in 1977, The King permanently left the building. Elvis Presley reportedly weighed 350 pounds at the time of his death, which is 187 pounds more than when he was a decade younger. In his autopsy, he tested positive for 10 different prescription medicines, including 10 times his prescribed amount of codeine. Many people believe that he died due to overdose even though the official reason given was he died due to cardiac arrest.

There were different theories as to what caused his weight gain. One theory is that at the end of his days, Elvis Presley was said to have overindulged in drugs which had a visible effect on his appearance. His weight gain is believed to have been due to fluid retention caused by drugs. So, technically speaking, he was never fat, he just looked swollen, especially on his face, hands, and stomach. Many fans who saw him at his final concerts swear that he did not look so fat as much bloated and sweating profusely and looking unhealthy.

For the other theory, there were people who chalked it up to gluttony. Nobody missed his penchant for food, especially for meat, peanut butter, and fried foods. How could anyone forget that one instance when he flew 800 miles in his private jet for Fool’s Gold Loaf, one of his favorite snacks? And that chapter in James Gregory’s 1960 biography The Elvis Presley Story on what anyone who wanted to date him would need to know, that read:

Note for his future wife: Elvis loves enormous breakfasts complete with sausage, bacon, eggs, fried potatoes, home-baked rolls, and coffee. He has a tremendous appetite at breakfast. His wife should never develop elegant or expensive tastes.

Elvis Presley also was apparently acutely sensitive about his weight gain which made him take extremely dangerous measures for weight loss. He once tried a weight loss diet of nothing but jelly made of his favorite black cherry soda and bananas for weeks to slim down.

Tired of struggling with the body image issues he started having after the weight gain, he once tried an extremely dangerous diet known as the sleeping beauty diet. A Las Vegas ‘doctor’ recommended the singer go into a medically induced coma to stop eating for the duration of the coma and then lose weight. That didn’t last long as he fell out of his hospital bed and woke up after which he never went for such weight loss methods.

Elvis Presley tried other normal methods but they didn’t seem to work for him and so he could never reverse his weight gain no matter what he tried and was fat when he died.