Hillary Clinton’s Plastic Surgery: The Former First Lady of America Looks Very Different These Days; Check Out The Before and After Pictures! 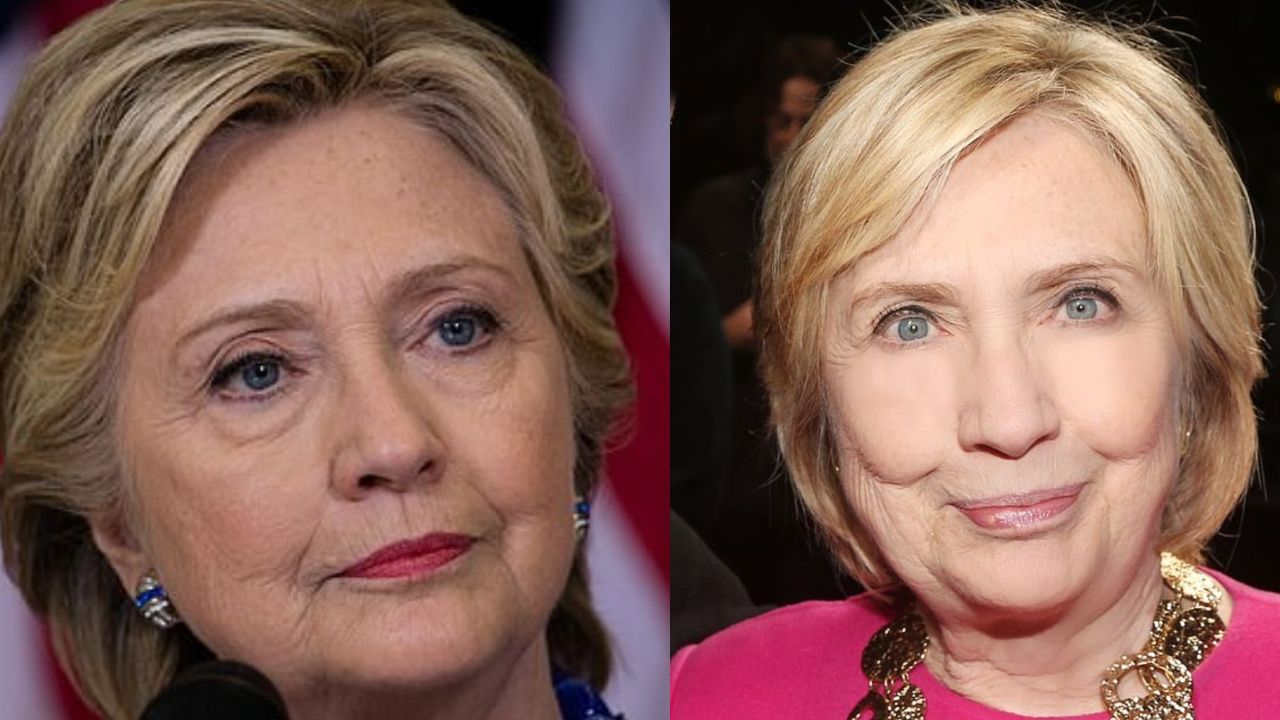 Hillary Clinton is an American politician and diplomat. She is a former lawyer who served as the 67th United States secretary of state from 2009 to 2013 and as a United States senator representing New York from 2001 to 2009. She was also the First Lady of the United States from 1993 to 2001 as the wife of President Bill Clinton.

She is a member of the Democratic Party. In the 2016 presidential election, she was the party’s nominee for president. She became the first woman to win a presidential nomination by a major U.S. political party. And though she won the popular vote, she lost the Electoral College vote, thereby losing the election to Donald Trump.

Hillary Clinton, with passing time, appears to look younger and younger which has increased the discussions of her getting plastic surgery. People believe that the reason behind the youthful looks she has now might be because of her plastic surgery.

Previously, we touched on the plastic surgery efforts of Lara Trump and Teresa Giudice.

Hillary Clinton’s plastic surgery speculations began intensifying in 2015 after a writer called Ed Klein claimed that she has had a lot of work done in a book he wrote about her titled Unlikeable. He wrote in the book that Hillary underwent cosmetic surgery secretly ahead of her run for president.

He even brought up Bill Clinton in his account. He said that it was him that wanted Hillary to get a face-lift and though she could do nothing about the calendar and how she’s aging, she definitely could do something about the lines and sagging skin on her face.  However, whatever she could do, Klein claimed that she had no intention of going to a clinic so, instead of doing that, she asked a well-known plastic surgeon to go to her house in Chappaqua, NY, and set up a ‘mini operating room in her home with the latest medical equipment.’

And in her own house in a makeshift operating room did Hillary Clinton have her cheeks lifted and her wrinkles and lines Botoxed, Ed Klein wrote in Unlikeable. He also added that she had work done on her eyes as well as on her neck and forehead. He quoted one of her friends in the book when he wrote that she took the plastic surgery gradually and didn’t have anything drastic done because she wanted to evaluate the changes as she proceeded.

The politician apparently was very careful about it and had intended to stop the procedures immediately if they had started to make her look weird. To her, plastic surgery was a pretty big deal so it did require multiple visits as per the book written about her by another person, who titled the said book Unlikeable.

As it turns out, not only did the author Ed Klein find Hillary Clinton unlikeable but she found him the same too. The feeling was mutual, which got revealed when she rubbished everything he wrote about her and her plastic surgery through her spokesman Nick Merrill. Nick said of Klein’s book,

Someone should do a book about Ed. They could call it ‘Bulls - - t: The Problem With Anything Ed Klein Writes. The only true thing about him is his consistent and utter lack of a relationship with the facts. He has more hair than credibility, and the man is bald. So we’re not going to get down in the gutter with him and his outrageous fabrications.

Though Hillary Clinton trashed the book’s claims that she got plastic surgery, she was never off the radar when it came to scrutiny and detailed analysis of her appearance. People particularly zeroed in on her a few years later, in December 2019 when she made a public appearance at an event on Broadway in New York. She looked younger and different which many aesthetic experts believed was because of regular ‘tweakments’ and cosmetic procedures.

Hillary Clinton showed up with a wrinkle-free complexion and plumped-up cheeks to watch a performance of Ain’t Too Proud: The Temptations Musical at The Imperial Theatre, which according to the plastic surgery experts, were not natural. Dr. Ross Perry claimed that her different looks could be a result of Botox, injectable dermal fillers, and blepharoplasty.

In a conversation with Daily Mail about her plastic surgery, he said that her forehead looked particularly smooth which suggested that she had Botox administered in the forehead, frown line, and around the eye area as well as there appeared to be minimal crows feet.  He also suspected that Hillary Clinton may have had blepharoplasty which could be the reason why her around-the-eye area looked youthful and there were no under-eyebags and wrinkles in the corner of her eyes.

Dr. Perry also believed that Hillary Clinton had some help from the injectable dermal wrinkle injections for her cheeks area which looked fuller and rounded, hence more youthful. Another practitioner Dr. Judy Todd said that the slight more volume in the lips could be from a filler.

Amidst all this dissection of her looks, there was also criticism of Hillary Clinton’s new appearance and her ‘freaky ace job.’ Her chipmunk-cheek plastic surgery was said to be totally nuts. Dr. Yoel Shahar said that her face was distorted and looked completely artificial and inconsistent with her past appearance because of the excessive treatments. Dr. Anthony Youn said that the overuse of fillers and the laser treatments that radically smoothed her skin gave her a starkly unnatural appearance.

It should be noted that Hillary Clinton herself has never come forward to confirm or deny these speculations of plastic surgery.