Jessica Chastain’s Plastic Surgery: Check Out The Good Nurse Star’s No Makeup Look; Is It Just Skincare or Cosmetic Alterations! 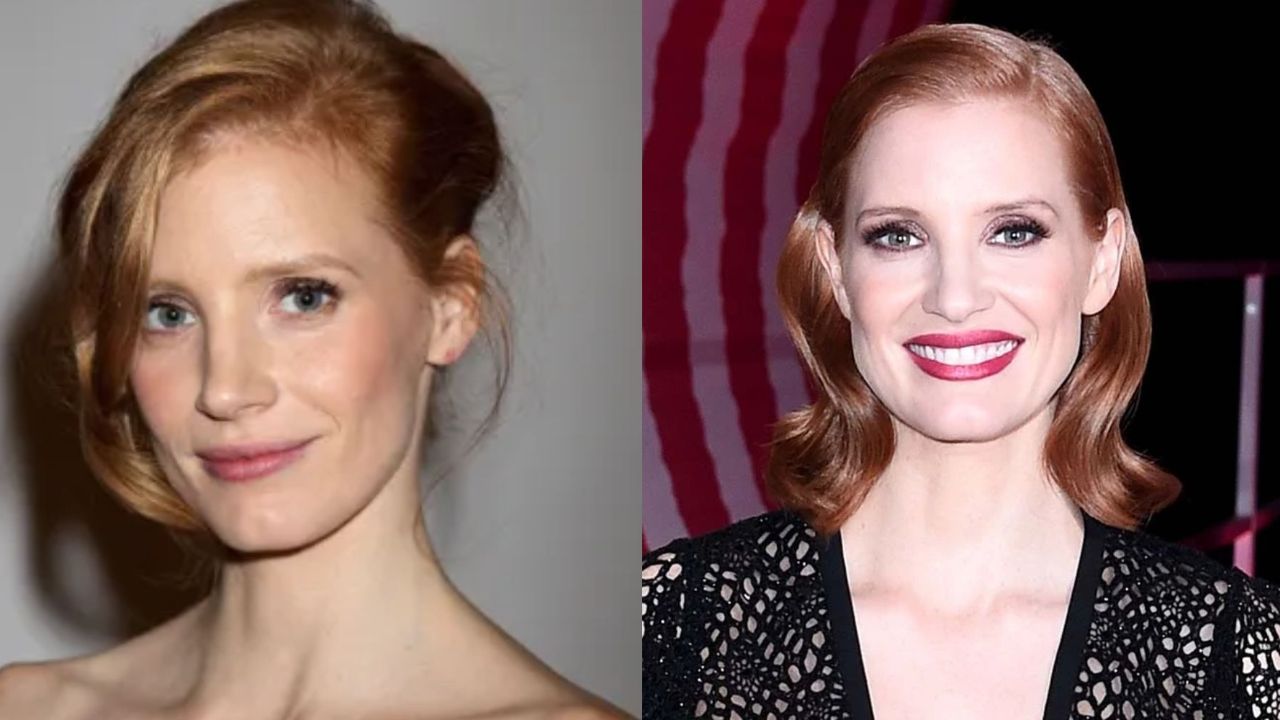 Jessica Chastain once denied having any kind of plastic surgery and said that she had no judgment of those who choose to get work done. The Good Nurse star also noted that she hadn’t ruled it out in the future. Jessica Chastain’s amazing complexion, especially with no makeup look, and her skincare made it seem like she didn’t need to have plastic surgery. But things might not be the same after the damage to her skin caused by the makeup she was required to have for The Eyes of Tammy Faye. People speculate that Jessica Chastain has gotten Botox, a nose job, fillers, and breast augmentation.

Jessica Chastain is an American actress and film producer who has made a name for herself in Hollywood with her incredible acting prowess and is known for primarily starring in films with feminist themes. She did theatres and television for several years before she made her film debut in Jolene in 2008 at the age of 31. Three years later, she got her breakthrough with back-to-back six film releases. And since then, she has received three Academy Award nominations with one win.

Jessica Chastain got nominations for Academy Award for her portrayal of an aspiring socialite in the period drama The Help and a CIA analyst in the thriller Zero Dark Thirty. She won one for her performance in the biopic The Eyes of Tammy Faye. She was critically acclaimed for her roles in the dramas A Most Violent Year, Miss Sloane, and Molly’s Game, and the television miniseries Scenes from a Marriage.

She recently appeared in Netflix’s The Good Nurse. She has lately been making lots of public appearances for the press tour of the movie. This has led to an increase in speculations about her plastic surgery despite her amazing complexion which really shines with her no-makeup look. Though her skin was damaged by the makeup she had to have for The Eyes of Tammy Faye, her skin looked healthy. People wonder if it is due to Jessica Chastain’s plastic surgery or if it is her skincare that makes her look like that!

Previously, we touched on the plastic surgery efforts of Kate Hudson and Amy Schumer.

Jessica Chastain (@jessicachastain)once said that she had never had any plastic surgery and had no judgment of anyone who had. She also admitted that she hadn’t ruled it out. Since then, maybe she got some work done because people have been speculating lately that she has taken the aid of cosmetic treatment because of how flawless she looks with her no-makeup look. They think that she has gotten Botox, a nose job, fillers, and breast augmentation.

Jessica Chastain is undoubtedly an incredible actress whose performances are always top-notch which always gets people talking and complimenting her. However, these are not the only praises she gets because compliments about her beauty and skin complexion (especially when she has that no-makeup look with her freckles on full display) are next in line. The fact that she’s an excellent performer has never been able to overshadow her beauty and fans are well aware of it. They only wonder if the secret to her attractiveness at this age is plastic surgery or skin care.

However, this conversation was about six years ago in 2016 and since then, maybe things have changed. I mean, Jessica Chastain’s pushing 50 and her plans of ‘might be getting plastic surgery’ could have been hastened because of the damage to her skin with the makeup she had on for The Eyes of Tammy Faye. Before the movie, she had very nice skin and a beautiful complexion.

And the secret to that healthy and porcelain complexion, her skincare, as per Jessica Chastain, was an animal product-free diet. She said that much of what she looks like came down to the food she ate and she ate a very clean diet. She noted that being vegan had made a huge difference in her life. But so had The Eyes of Tammy Faye makeup as well.

Jessica Chastain said in an interview that her transformation to Faye which took up to seven and a half hours and involved intense prosthetics, makeup, and wigs, began to cause a difference in her skin after a few weeks. She said,

I think for sure I’ve done some permanent damage to my skin on this. Listen, I eat very pure and I take very good care of my skin and I stay out of the sun and all that stuff. But, it’s heavy. And when you’re wearing it all day, every day—the weight of it on your body, it stretches your skin out. I finally took it off, and I was like, ‘I look 50 years old!’ No, I’m kidding. But it’s fine. It’s for my art.

Was her vegan diet and sunscreen enough to curb the damage to her skin caused by the makeup or did she get plastic surgery for that?

Well, if she did, she hasn’t yet confirmed it. So, for now, all of the plastic surgery talks surrounding her are merely speculations that are on the rise lately as she has been doing press for her movie The Good Nurse. People think that Jessica Chastain has gotten Botox, a nose job, fillers, and breast augmentation. Could she have gotten it after 2016 or are people wrong with their speculations?

As per some experts, Jessica Chastain has had plastic surgery. According to Dr. Steven Fallek, the medical director of BeautyFix MedSpa, the Interstellar actress appeared to have had her nose done as it seemed ‘slimmer’ in comparison to her previous looks, although it is ‘better and still natural. The board-certified plastic surgeon also stated that she might have had ‘jaw slimming’ along with ‘Botox to elevate her brow.’