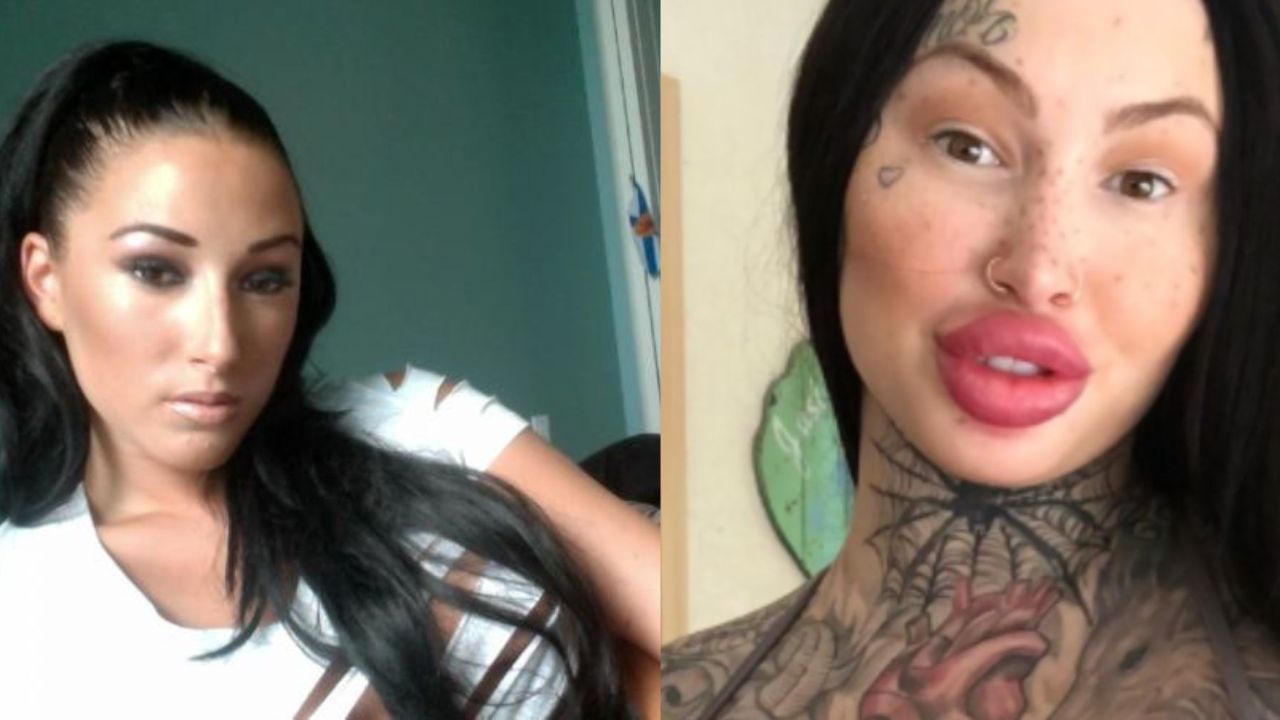 In the bizarre world of plastic surgeries and transformations, Mary Magdalene AKA LeavexoMaryMalone is making sure people remember her for her eccentric look and an outlandish plastic surgery addiction. Taking plastic surgery to next level, Mary Magdalene is a social media influencer and an OnlyFans model. In the hopes of becoming the World's most life-like blow-up doll, Mary underwent well over dozen surgeries as of 2022 and she isn't stopping!

Previously, we touched on the plastic surgery efforts of Megan Fox and Donna Mills.

Currently, in her 30s, Mary Magdalene (@1800leavemaryalone) was born in Toronto, Canada. Keeping most of the details of her childhood to herself, there's not much known about how Mary was before being who she is now. However, every now and then Mary lets some information slip about her life before her plastic surgery addiction.

As per Mary's upbringing, she claims to have grown up in an extremely religious Christian family. Her father was a pastor so Mary was always under an oppressive atmosphere bound by rules, regulations, dos, and don'ts. Soon Mary began rebelling and hence the initial phase of her plastic surgery addiction began.

Magdalene's rebellion against her father and religion began by turning to sex and drugs at an early age. In Before They were Famous, Mary claimed that by 12 years old she was already living her wildest life. Enjoying the high of cocaine and coming to school drunk was the model's everyday life.

The idea of plastic surgery enticed Mary when she was just 18 years old. The influencer then was working as an exotic dancer in Canada. While working she observed how other women had implants and fillers and that to her appeared seductive. Soon her obsession with plastic surgery, or as she calls it "the over-filled" look began to set in.

Soon Mary was working as a full-time stripper and an escort when she got her first surgery at the age of 21. While you may be wondering what her very first procedure was, it was a Boob Job! Mary's breasts now weigh 22 pounds indicating she has come a long long long way from when it all began.

Mary Magdalene in 2022: Her Plastic Surgery Addiction Almost Took Her to the Grave!

Over the years, Mary has had 3 nose jobs, buccal fat removal, 2 brow lifts, multiple fat transfers to her face, 2 sets of 20 veneers, 4 boob jobs excluding revisions which made her breasts go from 32 B size to voluptuous 38 J, 3 bbls, butt implants, and butt surgeries. Mary even printed all the procedures she underwent on a t-shirt and posted a picture wearing it. While some fans found it amusing the rest thought this was beyond insanity.

Coming into 2022, Mary got her fourth nose job, as well as cat-eye surgery and eyebrow implants, to create a 'Barbie nose.' She indicated at the time that she wanted to look like a 'forest elf,' and that she would be having more surgery to attain her goal. What really stole the show is her bizarre and speechless vagina surgery that almost cost the former stripper her life.

Wanting to have the "World's fattest vagina", Mary went to doctors in Mexico to make her dreams come true. Not so surprising, the procedure went horrible when Mary began losing blood and was allergic to the transfusion. While healing from the surgery, Magdalene shared that one side of her vagina was increasing in size thus undergoing another round of surgery. Also with her recent 2022 breast surgery, Mary's breasts now contain 5000cc implants each and weigh more than 10kg combined. Not to forget her regular fillers, botox, and implants!

From a rebellious girl growing up in a conservative family to one of the eccentric personalities on the internet, Mary Magdalene's life before being a plastic surgery addict was just as interesting and wild. Mary doesn't seem to stop any time sooner and is for sure ready to go miles with her addiction to achieve what she really wants.