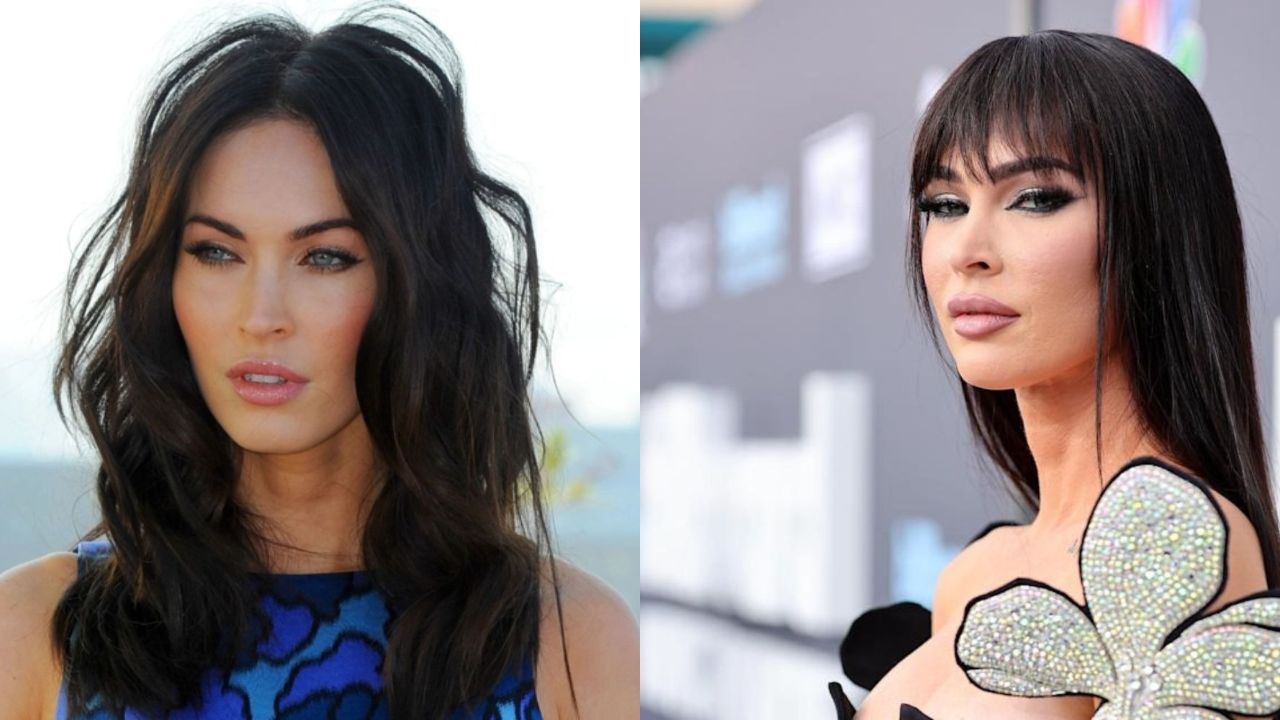 Megan Fox’s latest plastic surgery face makes her look like Kim Kardashian. An icon and a diva, Megan’s beauty has been eulogized ever since her debut on the golden screens. With her latest Instagram appearances in 2021 and 2022, Megan Fox raised some eyebrows with her plastic surgery face. Still looking young and evergreen, fans are eager to know the truth about what the actress got done!

A babe of the 2000s who still lives in people’s hearts as a diva and icon, Megan Fox‘s beauty captivated the world since she stepped into the screens. Growing from a young teen to one of the most attractive women to walk on this planet, the tales of Megan’s allure still goes on. Beginning her career with Holiday in the Sun in 2001, the actress has appeared in the blockbuster action saga Transformers, Teenage Mutant Ninja Turtles saga, her most famous Jennifer’s body, and many more.

While the tales of her beauty and charm are evergreen, Megan’s beauty isn’t all-natural. With plastic surgeries, the icon has fixed her flaws every now and then. The face that’s adored and worshipped was made with blades and Megan herself is open about it. So, here’s everything you need to know about Megan Fox’s plastic surgery face.

Previously, we touched on the plastic surgery efforts of Donna Mills and Johnny Depp.

Megan Fox’s Plastic Surgery Face: What Is the Secret Behind Her Goddess-Like Appearance? Here’s Her History!

Though being constantly praised for her alluring looks and femme fatale, Megan Fox, now 36, isn’t the type to judge a person with how they look. “But in terms of how I look, I’m completely, hysterically insecure,” says Megan in an interview with Cosmopolitan, indicating her beauty means much less to her.

Despite the difference in the definition of beauty, Megan went under the blades numerous times over the years to get that perfect look. Her plastic surgery face has always been praised as the tweaks aren’t drastic yet make her look beautiful every time.

Megan first walked the red carpet at the age of 16. With black dyed hair and matching black eyeliner, the actress appeared older than her age yet stunning. Noting that her nose and front teeth, which look to protrude somewhat, both seem to transform not long after.

The following year, she maintained the same look, and her brows were even thinner, following the year’s fashion trend, but her features appeared the same.

At the age of 20, she reverted to her distinctive color after trying with lighter hair, approximating the Megan we know today. Examining her nose once more, there appears to be a bump on the bridge, but it magically vanishes afterward indicating signs of her first plastic surgery.

Soon Megan Fox was a household celebrity and a global sex symbol by 2008 when FHM readers voted her the “Sexiest Woman in the World.” She was frequently likened to Angelina Jolie during this period, although other than the black hair and tattoos, there isn’t much of a likeness. Megan’s lips appear to be enlarged during that time, particularly her upper lips. It’s also speculated that Fox underwent some cosmetic dentistry to polish her smile.

With her seductive and sensual as the lead in Jennifer’s Body in 2009, all eyes were on Megan. By this time her face baby fat was gone, and her face more angular. Though no signs or evidence of plastic surgery could be found, it’s evident that Megan lost some weight. It could either be diet and exercises or liposuction which gave her that snatched look.

Just a year later the rumors of Fox receiving botox began to fly when she appeared on the red carpet with a noticeably plumped-up appearance. She was accused of overdoing Botox at the time, and although that may be true, her inflated lips and cheeks are most likely due to fillers like Restylane. The fact that she was only 24 years old added to the shock as botox was for older people. As botox and fillers weren’t as popular then as it is now, Megan had to face backlash for supposedly getting one.

As years passed by, Megan’s look didn’t significantly change except for her makeup and hair. Despite changes in her features, Megan managed to look natural and her enticing beauty always made her live in the eyes and hearts of her fans.

Coming into 2021, aged 35, Megan Fox looks just as young as when she was living on screens. However, her appearance on Instagram made many ponder the question, “How many procedures has she undergone?” Her evident plastic surgery face with voluptuous lips, wrinkleless and smooth skin, and super stretched brows clearly defied aging.

Looking at Megan Fox’s photos of 2022, she looks completely different from how she used to. Completely adapting plastic surgery face, the icon surely got rhinoplasty, facelift, and obviously botox and fillers and there’s not a single sign of aging.

By the conclusion of the year, it was evident that she and the Kardashians had similar style preferences. She was even reportedly seen visiting Dr. Jason Diamond, a plastic surgeon who has worked with celebrities like Kim Kardashian and Chrissy Teigen.

Surely editing photoshop and filters played their part in making Megan look different. However, discernible that Megan’s face is completely plastified and that she almost looks like Kim Kardashian with her surgeries.