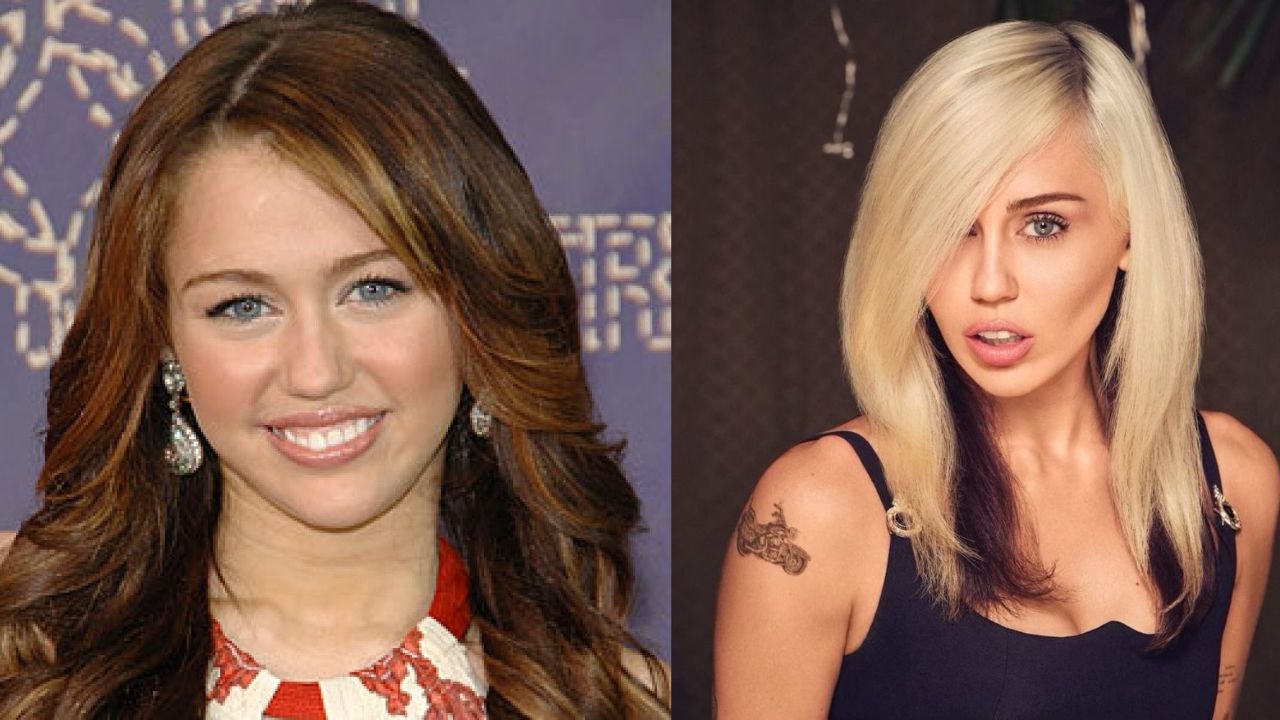 Miley Cyrus has often been the subject of plastic surgery speculations. Fans think the singer looks different from her younger days because of an eye lift, upper blepharoplasty, a nose job, buccal fat removal, cheek implants/ fillers, lip fillers, and jaw fillers. They also think her new look was because of the veneers which got her new teeth. Miley Cyrus has never responded to plastic surgery speculations about her.

Miley Cyrus is one of the very few successful child actor-turned-singer. She emerged into Hollywood as a teen idol when she portrayed the titular character of the iconic Disney series Hannah Montana. She took her music career along with her acting career and released a lot of stuff while she was still playing Hannah.

Her music is very diversified and spans varied styles and genres, including pop, country, rock, hip-hop, and experimental music. She is now known for her distinctive raspy voice. With thirteen entries, she has the most US Billboard 200 top-five albums in the 21st century by a female artist.

Her transition from a teen idol to a pop icon was an iconic one and she came out looking very different after her Hannah Montana days were over. She got a whole new face and she had a new look, which sparked many plastic surgery rumors. Many people suspected she got a nose job and veneers to get new teeth. Let’s find out more about Miley Cyrus’s plastic surgery!

Previously, we covered the plastic surgery stories of Allison Holker and LeeAnne Locken.

Did Miley Cyrus Have Plastic Surgery? Did She Get New Teeth? She Looks Different; Fans Suspect a Nose Job and Buccal Fat Removal After Seeing Her New Look!

Miley Cyrus (@mileycyrus) nowadays looks so different from her Hannah Montana days. Granted she was a teenager back then and she is a woman in her 30s now. But the change in her face I’m talking about is not aging and a natural one but the one that happened artificially i.e. plastic surgery. She’s been sporting a new look with a completely different face. And fans suspect the difference is due to an eye lift, upper eye blepharoplasty, nose job, cheek implants/ fillers, lip fillers, buccal fat removal, jaw implants, and veneers.

First of all, let’s talk about the new look she had when she made an appearance on The Tonight Show with Jimmy Fallon to promote her upcoming New Year’s Eve special. Fans then saw for themselves that Miley Cyrus now looks so different than she did just about a year ago. The Midnight Sky singer has a completely new face. And it was all due to plastic surgery because her extremely hollow cheeks had to be the result of buccal fat removal, right?

Well, some think it’s buccal fat removal whereas others think it’s because of her weight loss and the cheek implants she had before. According to them, cheek implants, combined with weight loss from aging, are what’s responsible for making her cheeks hollow because you can see when you take a close look at her cheeks before and after that she never had that level of projection or roundedness at that point in her face she has now. It looked very pointy because of implants (it could not be fillers because they look more pillowy) and after that weight loss, her cheeks looked hollow like she had buccal fat removal. Either way, it was plastic surgery.

And that’s about it for the more recent changes and the new look. Buccal fat removal or cheek implants are not the only plastic surgery Miley Cyrus has had. The Hannah Montana star has got a lot more work done on her eyes, nose, lips, teeth, and jaw. She had one nose job in the least (some insist she has had two nose jobs) and you can see it when you compare her photos from around 2013 to now. She had a much wider nose before whereas she has a more button-like nose now which looks more petite than ever.

According to plastic surgery expert Dr. Aamer Khan, Miley Cyrus had a nose job and you can see it in the way her nose tip looks as though it’s been refined when it was a little bulbous before. Plus, her nostrils appear to have been narrowed.

And her eyes are a completely different shape now. Fans suspect the Wrecking Ball hitmaker had had an upper blepharoplasty because she used to have really hooded eyes when she was younger whereas she has much more open eyes now. Plus, her eye sockets are too deep now and her eyes seem to be sinking in, which many people believe is due to an eyelift.

Also, the Party in the USA singer has got new teeth. The before and after pictures of Miley Cyrus’ teeth are so insane because it looks so obvious. Her smile before she veneers was a bit uneven. She had a crooked smile that exposed more of her gums. She had really gummy smile. So, she must have had gum reshaping to create a less gummy smile. And veneers straightened her teeth. They look brighter and whiter now.

Now, for more details about her other plastic surgery procedures, let’s take a walk down her Plastic Hearts era lane. Miley Cyrus sparked cosmetic treatment rumors like never before with her new look and new face. Many experts joined the discussion about her.

According to cosmetic surgeon Heather Rohrer, she definitely had filler under her eyes and cheek filler because she had slightly hollow under eyes and prominent smile lines when she was younger which seems to have been altered by a smooth flawless mid-face lift look which is achieved by the combination of under-eye and cheek filler. Her eye had a more lifted look and her smile lines were softened. Plus, she had much smaller lips in her younger years and seemed to have added a little lip filler to her big signature smile to make it all poutier.

Another plastic surgery expert Dr. Frank Agullo said that Miley Cyrus has had jawline contouring, which is a popular procedure done to enhance facial features, commonly achieved with fillers. So, fillers around her jaw. According to him, her cheekbones seemed to have been given a pop too which was likely achieved with fillers on the cheekbone area.

It should be noted that Miley Cyrus has never addressed these comments and speculations about plastic surgery.