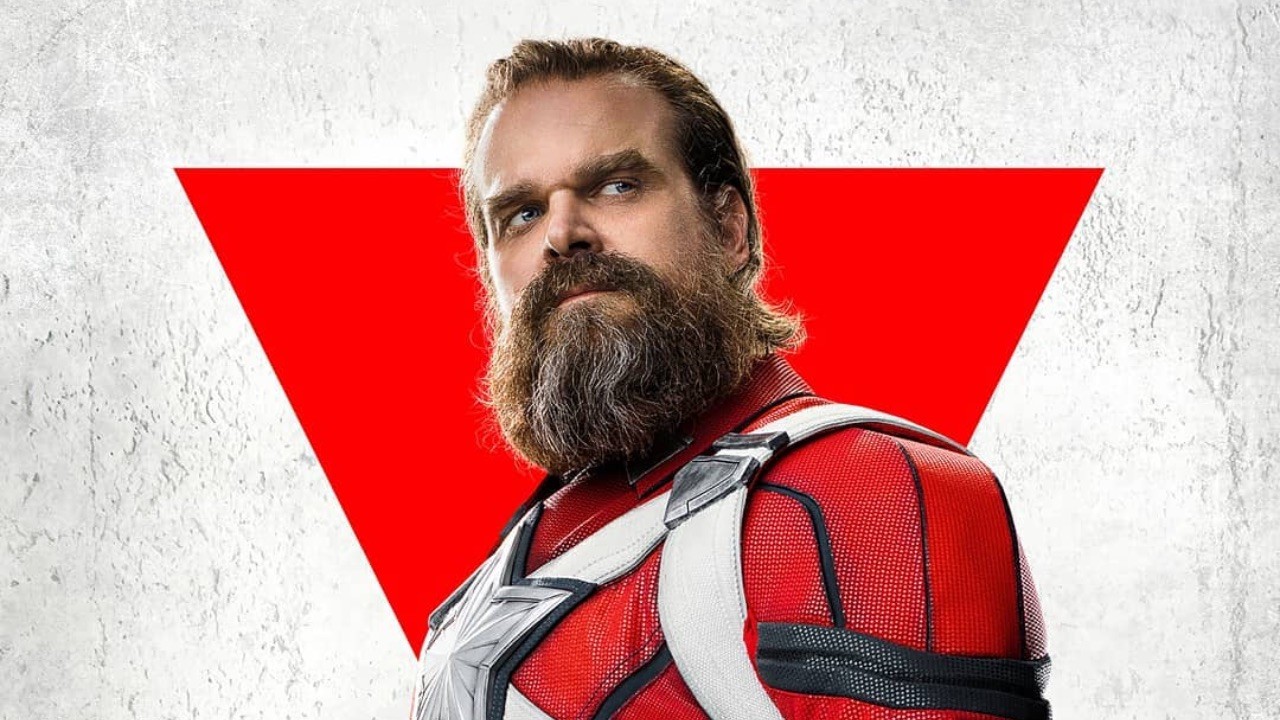 Lie and tall tales, if you tell them long enough, you might start to believe them to be true. That is the idea behind the boastful comments of Black Widow’s Red Guardian who things he fought Captain America in the 80s. Well, we think he is lying as we the origin of Captain America, but what does Kevin Feige has to say about the whole thing?

Black Widow gave us some deep dive look into Natasha Romanoff’s life before she was an Avenger. Even going so far as to give us a glimpse into her life as a kid, living in Ohio, with her “parents.” David Harbour played Natasha’s “dad” Alexei in the movie. He was also known as the Red Guardian, Russia’s answer to Captain America.

In the opening few minutes of Black Widow we see Red Guardian and his “family” escape Ohio and arrive in Cuba. They are separated there and cut to more than 2 decades later and Alexei is in Russian prison and telling tales about fighting Captain America in the US. Well, one challenger called him out in the gulag and now Kevin Feige gives his take on the whole situation.

Red Guardian Vs. Captain America – Did it Happen?

The events in Black Widow takes place after Captain America: Civil War. As the heroes fight over the Sokovia accords the Steve and Tony factions are separated. And even though Black Widow was in Iron Man’s team, she helped Steve and Bucky escape the hanger in Germany. That mean she was at the top of Ross’ list of rogue superheroes.

On the run and with the word looking for her, Natasha goes back to Budapest where she finds her sister, who is also on the run. Together Yelena and Nat decide to find the Red Room and destroy it, something Natasha thought she did a long time ago. But to figure out where the Red Room is, they need someone who was on the inside of the organization, their “father.”

Their father Alexei is in a prison and we see that time has not been kind to the former Soviet hero. We also see David Harbour’s character talking about past exploits, with his fellow prison mates. In one of the tales, he talks about fighting Captain America in a nuclear missile silo to which one of the prisoner calls bullsh*t.

Even after his “daughters” rescue him from the prison, the first thing Alexei asks to Natasha is if Captain America talked about him or not. Red Guardian really thinks he fought Captain America, contrary to the fact Cap was in the ice from 1945 to 2011.

So, when one fan asked Kevin Feige about the who delusion during the #BlackWidowWatchParty twitter thread. The head of MCU replied, “Good question… Although, wasn’t Captain America frozen in ice then?” The Red Guardian was Soviet Union’s answer to Captain America, and he made up in his mind that they are arch nemesis.

David Harbour previously talked about the whole things, saying, “Part of the fun thing about Alexei is that I wasn’t interested in reality. He doesn’t even know that he’s lying. Sometimes as an actor, I’ll have to know the reality because I’ll know [if] the character is lying. But Alexei simply believes this stuff is true. There’s a thing, confabulation… where people actually just believe their lies to such a degree that even when confronted with reality, they can’t process it. It doesn’t make sense [to them].”

If Black Widow had taken place before Avengers: Endgame, one could have made an argument that Alexei was probably speaking the truth. After defeating Thanos, Cap went back in time return all the infinity stones to their timeline. But after finishing the job, Steve did not return back, instead he chose to stay with Peggy in 1969.

So, for argument sake one can say the Red Guardian and Captain America did get in a fight. Most people just did not know it was Captain as he supposedly died in 1945. In secret, the old Cap from the original timeline could have fought off dangerous aggressors. But Black Widow took place before time travel was a things, so we have to believe that Alexei’s tales are just that.