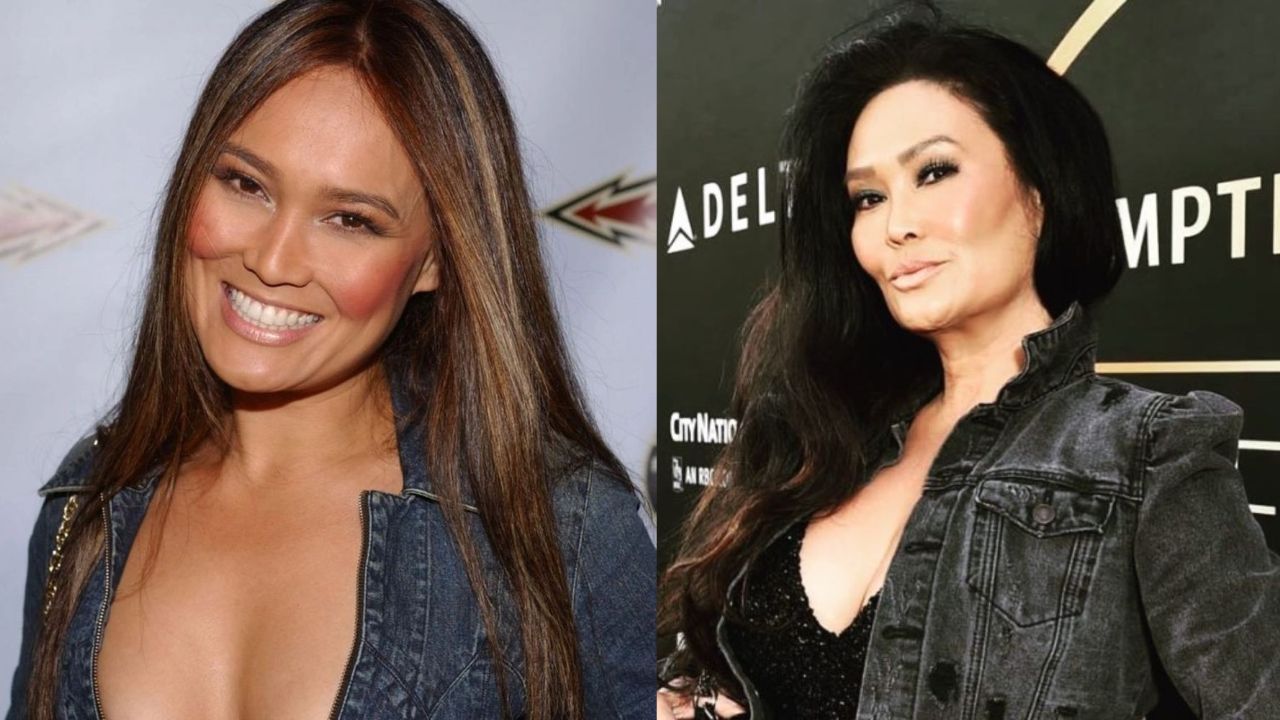 Tia Carrere has now, unfortunately, become the example of plastic surgery gone wrong because every procedure she got seems to have gone botched. The True Lies actress got way too much Botox injected into her forehead, you can see where the implants sit on her face, her lips always look puckered up, and her facelift has made her earlobes disappear. Tia Carrere has never addressed all these bad plastic surgery comments.

Tia Carrere is an American actress, singer, and former model who is most recognized for her portrayal of Cassandra Wong in the feature films Wayne’s World and Wayne’s World 2 and also for starring in True Lies in the role of Juno Skinner. After she got her first big break as a regular on the daytime soap opera General Hospital, she went on to do a lot of significant roles.

She voiced Nani Pelekai in the Lilo & Stitch films, she played the role of Queen Tyr’ahnee in the television series Duck Dodgers, she appeared as Richard Lewis‘ girlfriend Cha Cha in Curb Your Enthusiasm, she starred as Sydney Fox in the television series Relic Hunter, and she was cast as Lady Danger opposite RuPaul in Netflix’s AJ and the Queen. She also competed in the second season of Dancing With The Stars and in the fifth season of The Celebrity Apprentice.

As for her singing career, Tia Carrere has released five albums so far – Dreams, Hawaiiana, Ikena, He Nani, and Huana Ke Aloha. She has won two Grammy Awards- one for Ikena and the other for Huana Ke Aloha.

Talking about what’s going on with her recently, she is kind of lowkey right now but even then, she has somehow managed to be the subject of plastic surgery speculations. More than that, people have started singling her out for her bad cosmetic procedures. It does look like she had a lot of work done and went overboard with it because there are so obvious differences we can tell. Let’s find out more about Tia Carrere’s plastic surgery!

There are more interesting plastic surgery stories of Julia Haart and Savannah Chrisley for you to check out.

So, did Tia Carrere (@tiacarrere) get plastic surgery? That should not even be a question because there is nothing more obvious than the fact that she did get cosmetic procedures as her face now looks very distorted as a result of all the work she has gotten. There’s no way she is still natural. She is now one of the examples of bad plastic surgery and her face can be a guidebook for what not to do when it comes to cosmetic work.

Tia Carrere once said, “Beauty lasts five minutes. Maybe longer if you have a good plastic surgeon.” But did it, Tia, for you? Because it sure does not look like it. It’s really sad how she went the way of plastic surgery because she was very beautiful back when she had not messed with her face. (Not that people appreciated her back then. She was always told she looked too ethnic for roles.) But as she aged, she probably thought plastic surgery was the way to go and how wrong she was. If she had aged naturally, she would have looked much better.

If the True Lies actress had thought that she was going to get something subtle done and make only minimal changes, it was very unfortunate because none of those things happened. In fact, it looks like she went way overboard with all the plastic surgery. Maybe her surgeon got way too overenthusiastic. It didn’t work out for her.

Tia Carrere could have done with Botox if injected in the right dose. But she or her surgeon took it too far and now she has the smoothest forehead with no wrinkles and lines which would have been fine but her forehead does not look natural and frankly, it’s a little creepy to look at. That’s not a sign of good plastic surgery.

The General Hospital actress also had cheek implants, which is by far the most disastrous procedure she had had. Like you can see where the implants sit on her cheeks and that is never a good thing. And why did she elect to have that when she already had high cheekbones? She really didn’t need to fill out in that area. Also, she looks like she got fillers under her eyes because her eyes look kind of small, squinty, and pulled back. What a shame of plastic surgery because her eyes used to be one of her most beautiful features!

Besides, lip fillers are very obvious on Tia Carrere’s face. She used to have much thinner lips before. Now, it looks like she is constantly puckering up her lips. The way they filled out looks overdone and not very flattering. It’s very sad that she felt the need to go through all these plastic surgery procedures when she could have looked so much better without all of it.

Also, the Wayne’s World star got something done on her ears because now, she has no earlobes at all. People don’t remember her ears looking like that before. Apparently, as some people pointed out, “That’s a classic sign of bad plastic surgery, they call them pixie ears, they are the result of a facelift.”

It should be noted that Tia Carrere has never confirmed that she had plastic surgery.