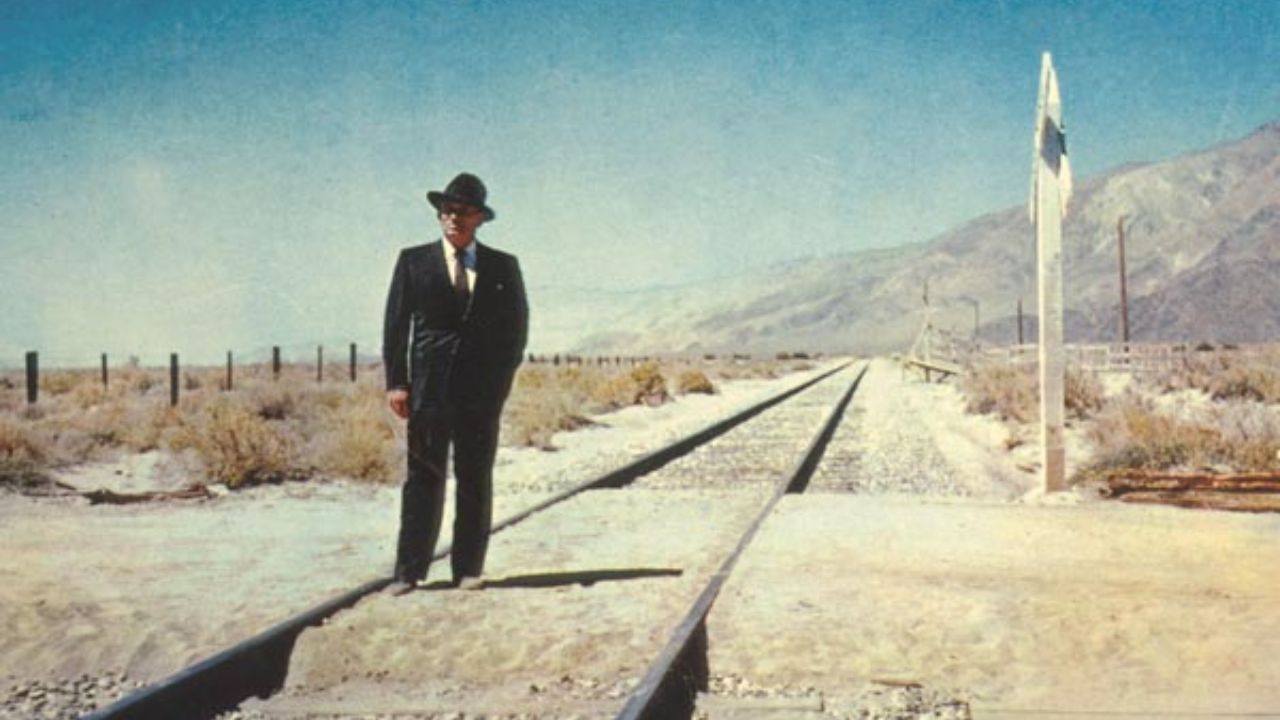 Bad Day at Black Rock was filmed almost exclusively throughout California. Alabama Hills and Lone Pine are some of the filming locations of the movie. Even the studio filming took place at MGM, a filming studio in California.

Bad Day at Black Rock is a 1955 American neo-western film that tells the tale of a mysterious man with one arm who arrives at a tiny bleak town in the deserts looking for a man.

The movie set in the backdrop of a hostile and menacingly isolating, and intimidating town, was critically acclaimed and thematically linked to civil responsibility, individual integrity, and group complacency.

It turned out to be historic for it was selected for preservation in the United States National Film Registry by the Library of Congress as being “culturally, historically, or aesthetically significant” in 2018.

Previously, we discussed filming locations of Good Sam and Lilies of the Field.

Where was Bad Day at Black Rock Filmed?

Principal photography of Bad Day at Black Rock was done in California state. In fact, the movie was adapted from a short story called Bad time at Honda, but the title was changed to Bad Day at Black Rock after writer Millard Kaufman happened to come upon a post office and gas station collectively known as Black Rock.

And even though initially location scouting was done in Arizona, the filmmakers decided to go with California.

The tiny desert town that the protagonist John J Macreedy arrives at the beginning of the movie was shot on the edge of Death Valley, at Lone Pine on Route 395, Central California. The Lone Pine Branch of the Southern Pacific Railroad, which once linked Mojave and Lone Pine, has long since gone.

A good part of the filming was also done in the nearby Alabama Hills. It was and is such an extremely popular filming location that the local road is called Movie Road. There are trails you can follow to view locations of the many films shot here; there’s even an annual Lone Pine Film Festival.

The set of the town that the movie is filmed in – the town of Black Rock was constructed in the shadow of the former Manzanar Internment camp, a despondent place where Japanese Americans were confined during the war.

This set was built a mile north of the Lone Pine Station, a spur off of Southern Pacific Railroad’s Jawbone Branch, which served the northern Mojave Desert and Owens Valley.

The studio was also used for filming. Most of the interior shots were filmed in Metro-Goldwyn-Mayer Studios in California. And the opening sequence that showed a speeding train rushing at the camera was shot from a helicopter as it flew away from the moving train. The film obtained from that was then run in reverse which was the opening shot.

The production of Bad Day at Black Rock also took place in some parts of Sierra Railroad, Jamestown in California.

The movie was shot in color and Cinemascope was used to take the maximum advantage of the new widescreen technology in emphasizing the isolation and menace of the town.

The reviewers of the movie seemed to be at unanimity as Bad Day at Black Rock was rewarded with almost universally positive reviews at the time with many noting its Western-like elements. It was often compared favorably to the acclaimed Western High Noon.

Even when the storyline of Bad Day at Black Rock was criticized to be crudely melodramatic, movie critic Pauline Kael couldn’t help but praise the film for its direction and cinematography describing it as “a very superior example of motion picture craftsmanship”. The movie has a 97% approval rating based on 29 reviews on Rotten Tomatoes.