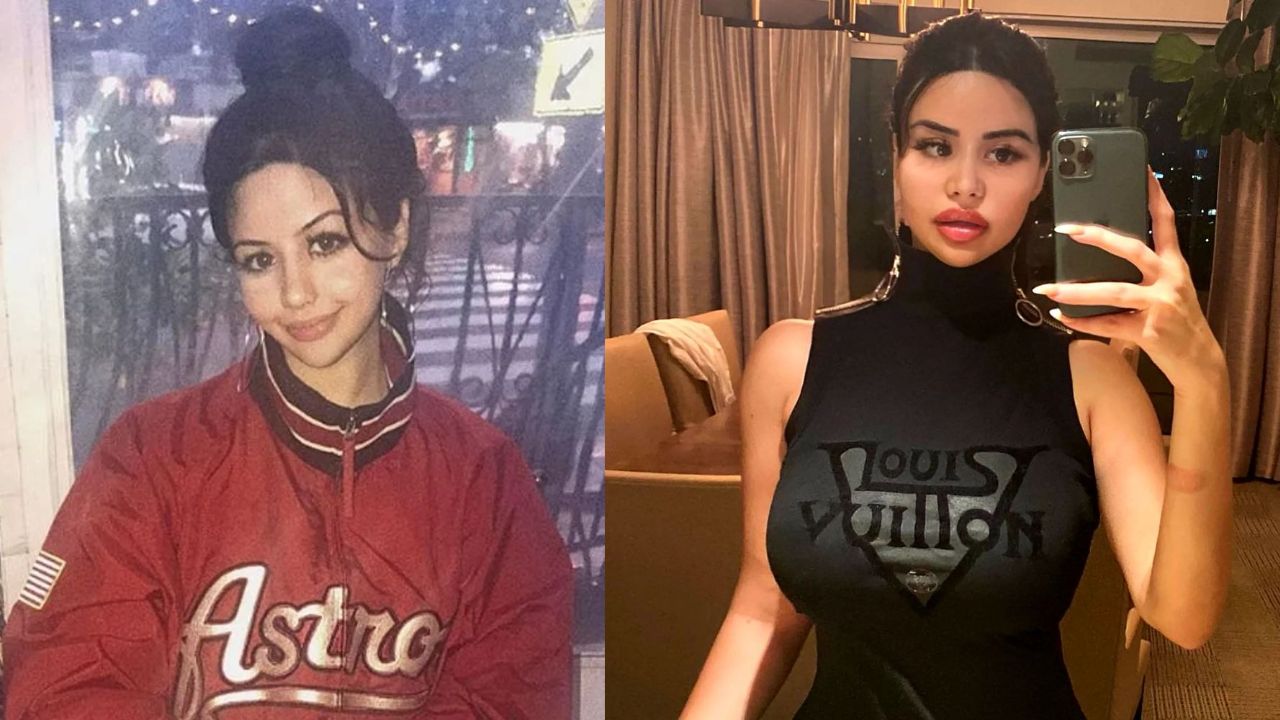 Yungsweetro has had a whole body makeover with plastic surgery, most likely Botox, a nose job, fillers, lip fillers, breast implants, liposuction, and a butt lift. Travis Scott’s side chick ig model, as the internet knows her (Rojean Kar), has not confirmed that she had plastic surgery but it couldn’t be more obvious. Many want to see the pictures of Yungsweetro before plastic surgery but they are not available. She probably looked more like a human and less like an AI-generated image before surgery.

Rojean Kar, who goes by Yungsweetro on Instagram has outed Travis Scott for cheating on Kylie Jenner ‘every f*cking night’ and ‘in every f*cking city’ with several girls, one being herself, after he stupidly denied that he knew her when she had receipts (she said she did). She claimed all this on her Instagram stories a few days ago which has shaken the Keeping Up With The Kardashians viewers to their very core – not. Nobody was shocked at this hot revelation. The only thing that shocked people was Yungsweetro’s obvious plastic surgery.

Previously, we touched on the plastic surgery efforts of Jessica Chastain and Kate Hudson.

When Rojean Kar posted videos of herself explaining her relationship with Travis Scott after he outright denied that he knew her, another messy Kardashian relationship drama was born. But that’s nothing new so, what people found more interesting than the mess was her appearance and her striking similarity with Kylie Jenner, the poster child of plastic surgery.

None of the people could get over her appearance for some reason. They couldn’t tell if they liked it or not at first, all they did was notice it because …uhh.. they are not really used to seeing people like that, to put it generously. Like let’s say it like it is, Travis Scott’s ‘ig side chick’ is a lookalike (an extreme and intense version if you catch the drift) of Kylie Jenner, his baby mama who herself could be a shop for plastic surgery. Every single facial feature of Yungsweetro looks so sickeningly perfect like all of the pictures she posts on ig could so easily be generated by AI to show the perfect plastic surgery.

All of the people on the internet who watched Yungsweetro talk on Instagram stories, at first, were oddly drawn?? to her face and were left thinking of it, something along the lines of ‘there’s something different about the way that girl looks’ before they jumped to ‘of course, it’s plastic surgery, by the looks of it, thousand of those procedures because no normal human looks like this.’ The Kardashian Kulture has really gotten to her. She has even gotten ahead of them by the looks of it.

Not a single feature on her face and a single part of her body look untouched by surgery. Yungsweetro must have been a jumble of insecurities to get a whole body modification. Definitely not shaming anyone because plastic surgery can be a choice and an empowering one at that for many women but man, was that a choice? (She does have a sh*tty choice) Clearly, Yungsweetro is not those women. Because taking such extreme measures to completely modify oneself to fit into the completely fake-looking standards of beauty is not empowering.

The ridiculous and unattainable standards and trends (they were never here to stay, they are already starting to fade) of ‘beauty’ is definitely hard and can impose on women’s self-esteem but Rojen Kar didn’t even try to fight those. If she did, she lost the fight, which is the saddest state of affairs because the pictures that she posts of herself on ig could very well be a wax statue after all that plastic surgery.

Yungsweetro looks gorgeous but out-of-this-world gorgeous and not in a good way. She probably looked fine and like a human before all the plastic surgery but now, it looks like she killed the personality and uniqueness of her face to transform into a generic and bland ig model.

Rojean Kar has got a too shiny and smooth forehead. She definitely has had Botox which is just plain unnecessary for anyone her age. She’s 29 right now. Plus, she has that pillowy complexion that screams fillers. And her nose is just too perfect and too button-shaped that it could not be natural. She can’t possibly deny a nose-reshaping procedure. And with that oversized lips with that huge pout, she can’t deny lip fillers either.

And it’s not just Yungsweetro’s face, it’s her body. She looks artificially endowed and is the perfect hourglass-shaped figure because of a lipo and butt lift as well? It looks like it is.

Many people don’t like what Travis Scott’s side chick ig model has done to her body with plastic surgery. Well, it’s not for them to like (but isn’t it) but since she shaded Kylie Jenner multiple times on the internet, there was always going to be a discourse about the similarities between them. Rojean Kar even has that annoying sweet fake voice that Kylie does.

Yungsweetro’s appearance is being discussed on several forums as you’re reading this. None of the comments people have been flattering. One person wrote that she looks hideous and those fake looks don’t age well and if they go outside in the rain and the hair product and 8 layers of drywall on their face melt off people would be terrified. Another called her uncanny valley style fake.