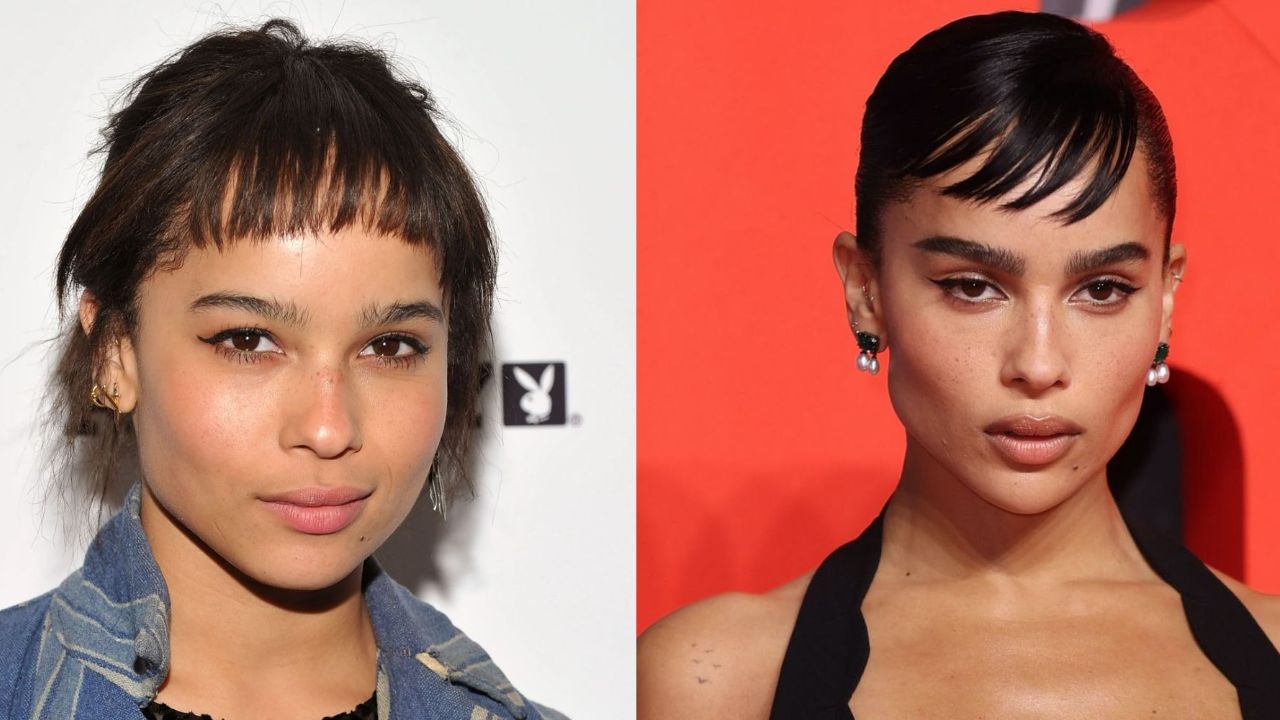 Zoe Kravitz’s plastic surgery supposedly includes upper blepharoplasty, nose job, buccal fat removal, lip filler, cheek fillers, chin implants, and ponytail facelift. Fans of the Catwoman believe that she looks very different from when she was young before surgery. However, Zoe Kravitz herself hasn’t admitted to having any plastic surgery.

Being born to Grammy-winning rock star Lenny Kravitz and Emmy-nominated Lisa Bonet is not Zoe Kravitz‘s only claim to fame. She has excelled at everything she has done in her career in the entertainment industry be it acting or singing or modeling. She has been a part of several high-profile movies including X-Men: First Class, Mad Max: Fury Road, The Lego Batman Movie, and Spider-Man: Into the Spider-Verse. She also played Catwoman in the live-action DC film The Batman.

The actress has earned much praise for her role in the HBO drama series Big Little Lies which earned her a Screen Actors Guild Award nomination. She has also done many independent movies. On the music front, she is the leader of the band Lolawolf and has released the albums Calm Down in 2014 and Tenderness in 2020.

Zoe Kravitz has also starred in modeling campaigns for Tiffany & Co., Vera Wang, Balenciaga, Alexander Wang, Coach New York, Tumi, and Calvin Klein. She was named one of the 100 Most Influential People in 2022 by Time magazine. She was also the face of YSL Beauté in 2017. However, right now, people on the internet are making speculations that hers is the face of plastic surgery. How much truth there is to that? Let’s find out!

Previously, we touched on the plastic surgery efforts of Summer Walker and Seo Ye Ji.

Zoe Kravitz Before Plastic Surgery: The Catwoman Is Speculated To Have Had A Nose Job, Fillers, Facelift, and More!

While Zoe Kravitz is undoubtedly talented and absolutely charismatic on-screen and her acting skills are always praised, her looks have never taken a back seat when it comes to being celebrated. She is never just a talented actress but always a gorgeous and talented actress. Suffice it to say that her fans are not just complimentary about her acting and movies, but they are also lowkey obsessed with her appearance.

While some of them believe that she has inherited her looks from her mother Lisa Bonet and is natural and that the differences in her face from when she was young were just because she was growing into her looks naturally and had nothing to do with plastic surgery, others tell them to touch some grass because she obviously looked different as a young person because it was before surgery.

They believe that Zoe Kravitz’s face has evolved from a cute look to a sexy, stunning one with that smoldering thing going on that’s model-like which is all due to plastic surgery.

In the opinions of Beverly Hills plastic surgery expert Charles Lee that he formed after noticing the difference in the distance between her eyebrows and eyes, the actress might have undergone upper blepharoplasty or browlift. Fans are more inclined to believe that she has had upper blepharoplasty because she used to have hooded eyes when she was young but now, her upper eyelid is more visible and her eyes don’t look hooded anymore.

Zoe Kravitz also allegedly had a rhinoplasty because her nose bridge looks much slimmer and sharper than before. Many people believe that you can tell she has had a nose job because she lost the resemblance to her mother after the plastic surgery.

The Big Little Lies cast also is highly suspected of having had cheek fillers or implants and buccal fat removal surgery. Zoe Kravitz definitely has very sharp and defined cheekbones now which was nothing like when she was young. She also has that hollow right below her elevated cheekbones but some believe that it was just an aging process wherein she lost her baby fat. Others believe that the change in her cheeks is too extreme for it not to be plastic surgery.

And only a few people disagree when the work on her chin is brought up. Her chin looked a lot less sharp and weaker before plastic surgery whereas now it looks very pointed. She looks much more sculpted and chiseled in her chin area which stands out in her recent photos. This is believed to be due to the chin implants she got to make her chin more defined.

Zoe Kravitz is also believed to have had a ponytail facelift and lip fillers though it’s only a few people who think so. But she has never admitted to any plastic surgery.  Not the nose job, not chin implants, and not the brow lift.

However, the actress once renounced the use of Botox to inhibit sweat secretion in an interview. Though it was not for a cosmetic purpose, she had criticized Botox saying that using it to deactivate sweat glands in the body was the dumbest, scariest thing she had ever heard. But she had not publicly shunned other plastic surgery and she has not been suspected of having Botox, so this disapproval of Botox might not mean anything.

And about other plastic surgery, don’t forget about the time when someone asked Zoe Kravitz what she had done with her beautiful natural lips and she replied, “um. put some lipgloss on them…” before shutting all such commenters with, “these are my lips. all pure. the equivalent as they always been.”

Zoe Kravitz hasn’t denied other plastic surgery but fans took it to mean that she has definitely had them when she shared that she felt insecure in the looks department in comparison to her cool, hot parents. In a 2018 interview with Rolling Stone, she admitted that she felt very intimidated by how cool her parents were and especially, how beautiful her mother was.

She said that she struggled to love herself when she was young,

I had a really hard time when I was 16, 17, 18, just loving myself. My mother’s a beautiful woman and I think, in some way, I felt intimidated by that sometimes.

Many fans think of this admission of her insecurity as an indirect confirmation of her getting plastic surgery.

Trending
Megan Thee Stallion’s Boyfriend Pardison Fontaine: Are They Engaged in 2022?
Trending
Chloe Grace Moretz’s Plastic Surgery: The Untold Truth!
Trending
Kelly Ripa’s Plastic Surgery: Has The Talk Show Host Had a Nose Job and Neck Lift? She Has Admitted to Botox! Check Out the Before and After Pictures!
Trending
Kathy Najimy’s Weight Loss: How Did The Hocus Pocus 2 Cast Lose So Much Weight? Check Out the Before and After Pictures!
Trending
Weird Jeffrey Dahmer Facts: Here Are Some Strange Facts About The Serial Killer!
House&Whips
About UsPrivacy PolicyTerms of UseDMCAContact
House&Whips is a leading media and entertainment source as a fast-growing information hub. For promotion or advertisement, please mail us at [email protected]