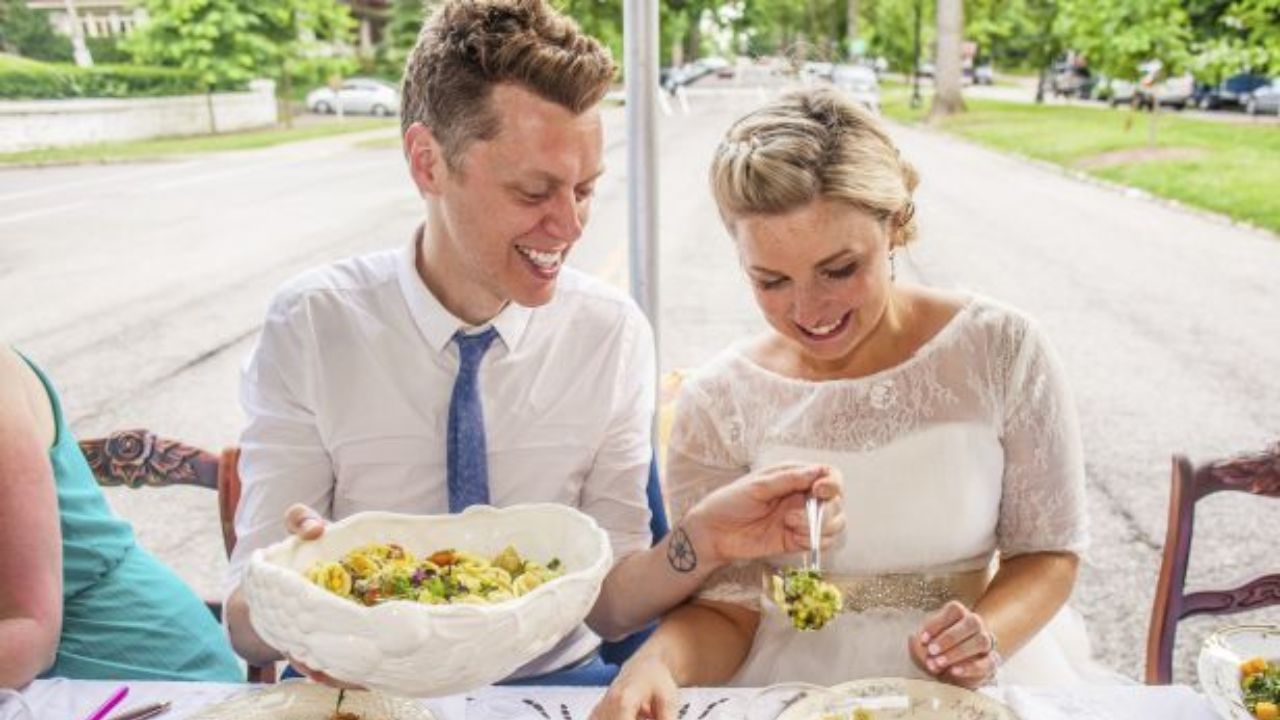 Chef Damaris Phillips has been married for almost seven years to her husband Darrick Wood. The couple met at a mutual friend’s wedding and started dating soon after. Damaris Phillips and her husband don’t have children and they seem to be heading down the path of adoption to get the kids.

Damaris Phillips is an American chef and television personality who rose to fame when she won the ninth season of the Food Network television series Food Network Star in 2013. Ever since she has hosted a number of reality shows and been an important figure in the cooking-entertainment field.

After she won the Food Network Star, she got her show called Southern at Heart which she hosted for five seasons from 2013 to 2016. She began co-hosting The Bobby and Damaris Show with Bobby Flay after that. In October 2017, she switched to Cooking Channel for a while and hosted Southern and Hungry with Rutledge Wood. She frequently makes appearances on Guy’s Grocery Games as both a judge and a competing chef.

She is recently working as a judge on the latest Food Network show Big Bad Budget Battle. With decent exposure now, fans have gotten curious about the personal aspects of the chef’s life. They want to know if she is single or committed or married. If married, who is her husband? And do they have children? Plus, there have been rumors of adoption for quite a while now.

Chef Damaris Phillips’ Husband: The Couple is Rumored to be Going for Adoption for Children!

Given how much you are seeing of Damaris Phillips (@chefdphillips) –Big Bad Budget Battle has really taken up the cooking show fans by storm – if you might be wondering about her relationship status and whether she is single, then you might want to know that the Southern Girl has met the Vegetarian Boy. And that Vegetarian Boy who is now her husband is named Darrick Wood.

Marriage changes one’s life and it was a wedding that changed not only the bride and groom’s life but Damaris Phillips’ as well because it was that wedding where she came upon her future husband. She was attending a friend’s wedding and we don’t know if she caught the bouquet or not but she definitely got the red roses. She might not have been the first one to get married out but she was the one who first got a glimpse of her husband (even though, at the time, she may not have known it).

Celebrity Chef Damaris Phillips’ friend turned out to be the friend of Darrick Wood as well. They met for the first time there and really hit it off. And now they are husband and wife. Cute story. It wouldn’t seem likely that they are a thing because their tastes kind of clash but looks like they managed. Tastes did not clash but opposites did attract. While Phillips loved meat, her husband was more of a vegetarian. And yet they married and are happy.

Damaris Phillips and her husband Darrick Wood dated for quite a while before they finally decided to tie the knot. Their wedding was a spectacular event that was noted for its extravagance. They made their wedding vows on June 13, 2015, in the venue of Willow Park in Louisville, Kentucky in the presence of 235 guests. And since then, they are happily married.

The chef is often accompanied by her husband Darrick Wood on her adventures as they navigate the world of food together. Even though he is a radio presenter and not employed in the same profession, they make time to appreciate what the others do. We have often seen them trying different food and the husband providing his honest input to cheer her.

The duo does not have children as of now but they seem to be trying – for adoption. Though Damaris and her husband have not mentioned specifically that they are going to be having children by going the way of adoption but there are some tweets she has made that have the fans convinced that she is considering adopting kids.

In 2018, Damaris Phillips wrote a tweet asking a person for advice on adoption. She tweeted,

Is there any advice you might give us from the child’s point of view? We’ve talked with a lot of adoptive parents but not as many adults that were adopted.

However, that was four years ago. And Damaris and her husband still do not have children even though, at one point, it seemed like they were trying for children by going for adoption.

While fans are definitely curious why Damaris Phillips is not having children normally, she has not revealed the reason. And so far, people have been gracious in not prying about the reason she is trying for adoption to have kids.

There were speculations going around at one point that her husband is a philanthropist who serves the underdeveloped. And like how he made her more vegetarian, he inspired more altruism in her and together, the couple decided that they are not going to make new children, but take care of the already existing ones that need love and care.

However, it is possible that there is no truth to the speculations and Damaris Phillips and her husband Darrick Wood are trying for adoption to have children because of some complexities.