Eddie Lacy’s Weight Gain: Why Couldn’t He Control His Weight? 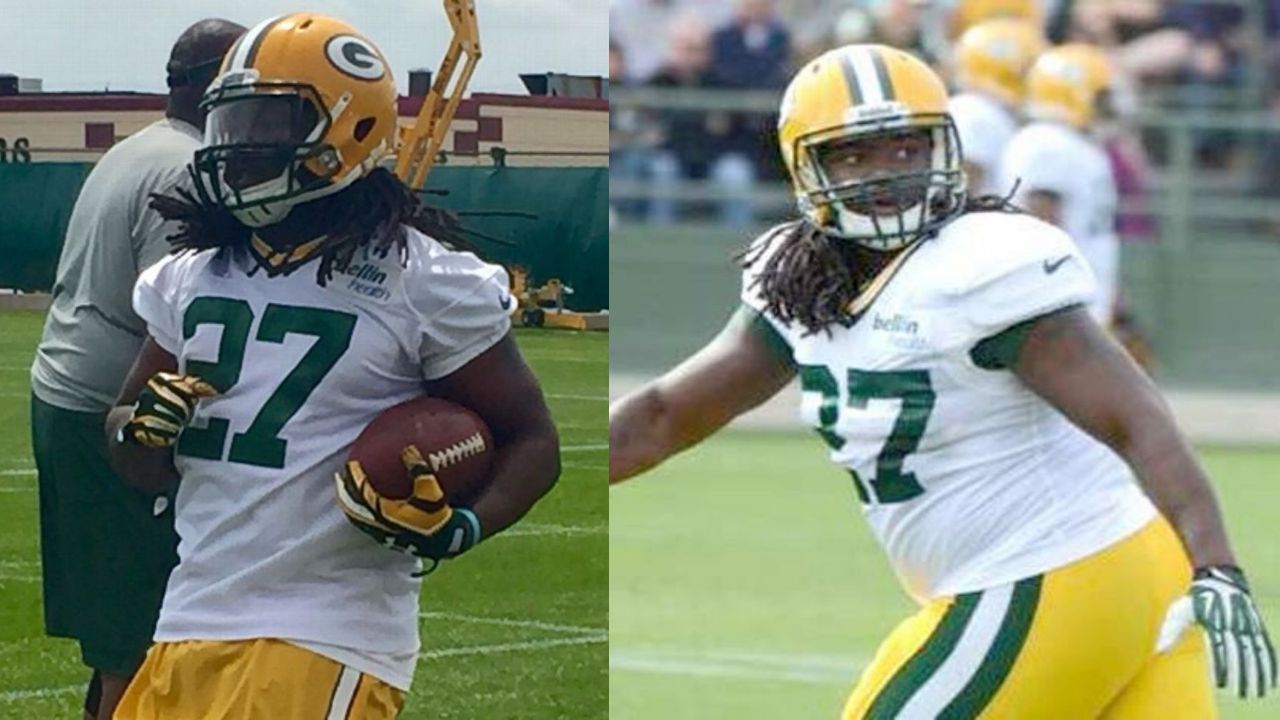 Following his weight gain in 2022, one aspect of 5 ft 11 inches tall Eddie Lacy’s online persona that has become well-known is his love of eating, especially Chinese food. People have given Lacy all kinds of nicknames, and he has acknowledged that maintaining a healthy weight has never been easy for him. Over the years, Eddie Lacy experienced a significant amount of weight gain and he has been bullied about it since then. Read this article to find out all about his weight gain journey in 2022.

Edward Darwin Lacy Jr., better known as Eddie Lacy is a former American football running back who was born on June 2, 1990. He participated in three BCS National Championship teams at Alabama during his college football career, which spanned the 2009, 2011, and 2012 seasons. The Green Bay Packers selected him in the second round of the 2013 NFL Draft. He played for the Seattle Seahawks as well.

He was chosen as a first-team player on the Class 5A All-State football team in December 2008 for the second year in a row by the Louisiana Sports Writers Association. Rivals.com ranked Lacy as the 116th top prospect overall and the 13th best running back when he made his commitment to the University of Alabama in February 2009.

Coming out of Dutchtown High School, Eddie Lacy was a highly sought-after recruit. He obtained a sports scholarship to study at the University of Alabama, where from 2009 to 2012, he was a member of coach Nick Saban‘s Alabama Crimson Tide football squad. During his undergraduate career, Lacy earned three BCS National Championships with the Crimson Tide.

There have been numerous amount of memes floating around the internet targeting the athlete’s weight. Fans are constantly shaming and bullying him about his weight. Read this article to find out about Eddie Lacy’s weight gain journey.

Previously, we touched on the weight gain efforts of Cardi B and Russell Crowe.

Eddie Lacy’s Weight Gain: Does He Suffer From an Eating Disorder?

After spending four years with Green Bay, Eddie Lacy (@eddielacy) signed with the Seattle Seahawks and, despite the weight gain, made the roster. After being selected in the second round of the 2013 NFL Draft, he played his final season in the league with the Seahawks in 2017.

It didn’t take Lacy long to respond to a fan who had taken a joke post from Facebook, reposted it on Twitter, and messaged him directly. The photo had a false caption claiming that the Packers had re-signed tight end, Lacy, to play for them, showing an obese man lining up on a field without a shirt.

In response, Eddie Lacy told the fan who messaged him that he appeared much rounder in shape and more like the image than Lacy ever did.

After reaching 267 pounds as a running back during his stint with the Packers, Lacy became the target of numerous jokes regarding his weight gain.

Early in his career, Eddie Lacy’s power led to on-field success, but weight issues prevented him from continuing in the NFL even though his contract contained a $55,000 incentive if he could stay in shape while playing for the Seahawks.

I hate that it has to be public because it’s like if you don’t make it, what happens? Clearly you don’t get the money, but whatever. I don’t really care about that. It’s just more the negative things that are going to come.

Throughout his career, Eddie Lacy dealt with inquiries about his weight from fans and the media, so it’s not surprising that the matter still bothers the former athlete. Lacy stated this during his NFL career:

Growing up in the Gretna suburb of New Orleans, Lacy never displayed any signs of laziness. He was constantly on the move, zipping about the neighborhood on his bike.

Even when watching sports on television, he wouldn’t remain still for too long. He became bored. He loved to be playing sports in the yard. He participated in basketball, baseball, and football with his mates.

He and his siblings would rush home after school, watch 30 minutes of cartoons Dragon Ball Z was by far his favorite, and then play outside until the streetlights came on and their parents ordered them inside. Eddie Lacy was one of the happiest and friendliest kids in the community, according to his mother Wanda.

Shortly after their house was plundered and most of their belongings were taken. They stayed in Texas until their funds ran out, at which point they temporarily moved in with Lacy’s aunt in Baton Rouge. A home with three bedrooms and one bathroom was shared by ten people. They eventually relocated to a small town called Geismar, which is 30 minutes south of Baton Rouge.

Gathering with his family for home-cooked meals was another thing that helped him feel comfortable and back to normal.
His mother commuted daily from Baton Rouge, where she attended nursing school, to his house to make dinner.

Eddie Lacy can’t help but reflect on the past and wonder if his current eating patterns would have changed if he had grown up in a community that placed more of an emphasis on healthy eating. But like so many other families trying to feed a large number of people on a tight budget, his family fell into the same old trap.

The eating habits of the athlete made him unable to control his weight. It seems like he eats for comfort and to escape from past traumas. He lost many opportunities in life due to his weight gain.

The internet isn’t merciful for Eddie Lacy; they come up with all sorts of memes and jokes related to his weight, which has made the athlete even more conscious about his weight. Now he claims he doesn’t even step on the scale, scared of the numbers that would come up on it.