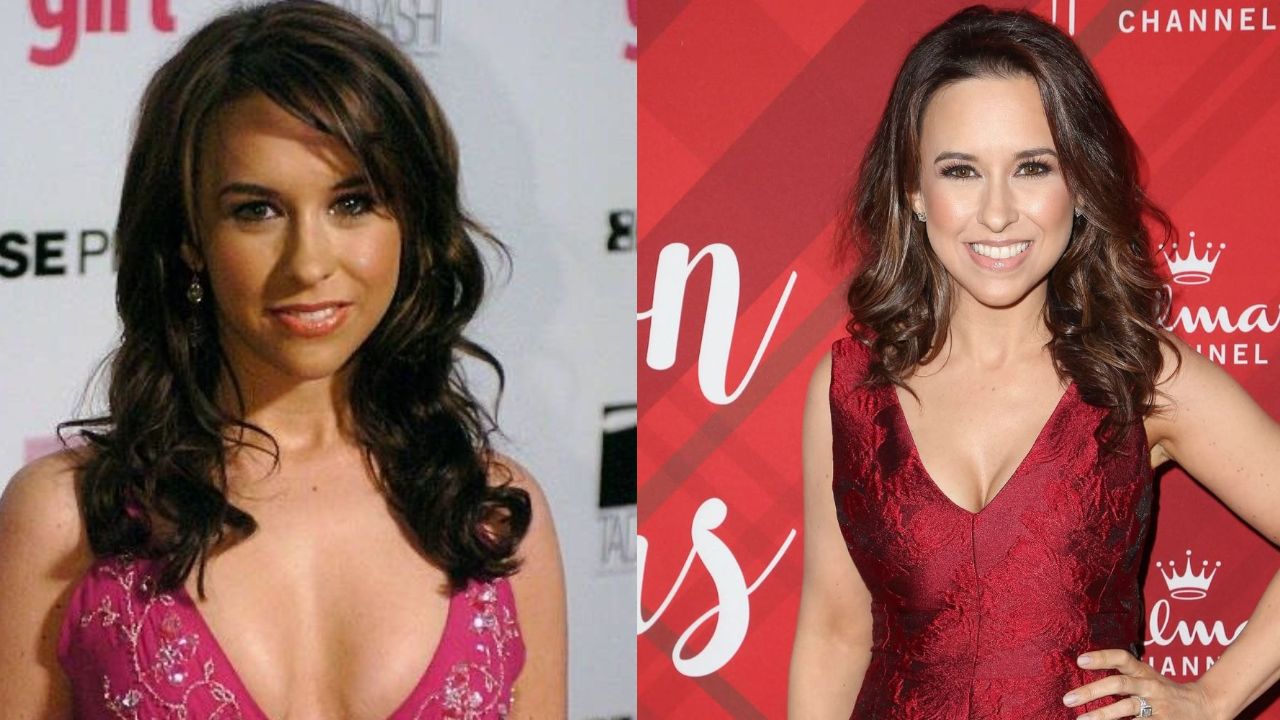 Lacey Chabert is an American actress who you might recognize as Gretchen Wieners from Mean Girls. She started her career when she was a child and one of her first roles was playing Erica Kane‘s daughter on All My Children. She played the role of Bianca Montgomery from 1992 until 1993. She was the third actress to play the part. She further gained prominence when she played the role of Claudia Salinger in the Fox television drama Party of Five.

Lacey Chabert has appeared in films such as Lost in Space, Not Another Teen Movie, and Daddy Day Care. She also did some leading roles as Meg Cummings in Dirty Deeds, Dana Mathis in the horror remake Black Christmas, and Penelope in the Christmas animated movie All I Want for Christmas Is You. She has made appearances in 27 Hallmark Channel movies.

As someone from showbiz, she was always going to be the subject of plastic surgery speculations. Yet she has managed to be escaped from being targeted for changing her appearance. But only because people were too preoccupied with her breasts. Much of the debate surrounding her is whether or not she had a boob job. Many people think that her breasts wouldn’t be so ample without a boob job. Let’s find out more about Lacey Chabert’s plastic surgery!

Previously, we touched on the plastic surgery stories of Hannah Kae and Anya Taylor-Joy.

Lacey Chabert’s Plastic Surgery: The Actress is Suspected of Having a Boob Job to Get Her Breasts Enlarged!

Lacey Chabert (@thereallacey) somehow managed to avoid plastic surgery speculations about herself maybe because she has not much changed in terms of her looks (when the world was almost getting used to Botox and other anti-aging procedures). One can hardly fault the people around her for that as she really looked like she had no alterations and looked very natural. There were no differences in her face and cheeks.

Maybe Lacey Chabert managed to avoid plastic surgery speculations because there was a brief time when she stopped showing up to work in the traditional sense. For instance, her time on television doing voice parts in animated shows such as The Spectacular Spider-Man, Young Justice, and The Avengers: Earth’s Mightiest Heroes. Only in 2013, she began to get more regular roles.

Lacey Chabert got the role of Dr. Amy Shaw in the television series Baby Daddy and did other less prominent movies including Slightly Single in L.A., Anything is Possible, Sanitarium, The Lost Tree, The Color of Rain, and Christian Mingle. Maybe that’s why nobody noticed her in any movie enough to start plastic surgery speculation about that.

But Lacey Chabert is in showbiz. She was eventually going to be subjected to plastic surgery speculations about her and it came. Although the rumors about her were feeble and not as persistent compared to many other celebrities, she had the rumors she needed to clarify whether or not she had a boob job. Nobody talked about her doing any procedures on her face like Botox and fillers.

The Mean Girls star had prominent and huge breasts and she never shied away from showing off her ample bosom. If you go back and observe her in films, she most often just showcases her boobs in fitting dresses in films and television shows as well as in red carpet events. Like she did recently during a promotion of her new Hallmark movie Haul Out the Holly. She looked gorgeous in that figure-hugging red dress. So, with time, people began to suspect that she had breast implants. They never took notice of her face.

Lacey Chabert’s large breasts held everyone’s attention. And their authenticity or should we say naturalness started to be questioned. Are those real or had she had plastic surgery to enlarge them? With time, they should have started shrinking but there she was as always, with huge breasts for her too-petite body frame. Many people began to think they were fake after all.

The Baby Daddy actress’ fans however stuck with her amidst plastic surgery rumors and argued that she had always been naturally busty and her breasts had been huge as long as they could remember. But it did nothing to convince others who thought her breasts were fake because they were too large for her body frame. They were very sure that she had her breasts done because they were so perfectly shaped, too round and voluptuous, on her slender physique.

Lacey Chabert continued to be the subject of breast implant rumors while she somehow managed to be speculated about plastic surgery on her face. People were just too preoccupied with her boobs and never cared for her face’s naturalness.  Plus, when it came to her face, there were no signs of invasive procedures so, it was safe to assume that she has not had any cosmetic surgery to maintain her appearance as well.