Lamar Jackson’s Weight Gain: The NFL Player Has Gained Muscle Mass of About 12 to 15 Pounds! 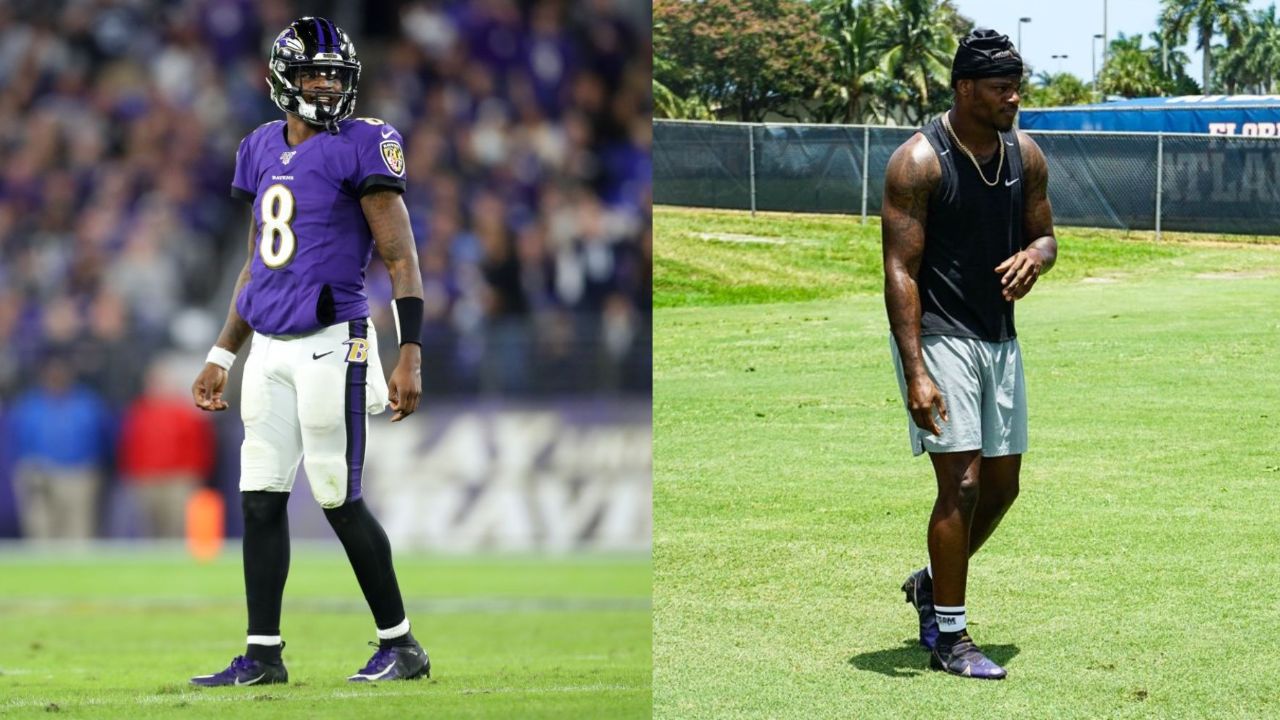 Lamar Jackson recently revealed a weight gain of about 12 to 15 pounds. The NFL player said that he increased his muscle mass because he wanted to. Lamar Jackson used to play at 205 to 208 pounds and after the weight gain, he weighs 220 pounds.

Lamar Jackson is an American football quarterback who currently plays for the Baltimore Ravens of the National Football League (NFL). He started playing at a very young age. He could throw a football 20 yards when was just 8 years old and in high school, he could throw 100 yards. He played college football at Louisville and he even won the Heisman Trophy during his sophomore year. In 2018, he was drafted in the first round with the 32nd overall pick in the draft by the Baltimore Ravens after trading up for the selection with the Philadelphia Eagles. He was the fifth quarterback to be selected that year.

He became the youngest NFL quarterback to start a playoff game at age 21 when he started as a quarterback for the Ravens in his rookie season after an injury to incumbent Joe Flacco and he clinched a division title with the team. The very next year, he not only set the season record for quarterback rushing yards but also led the league in touchdown passes while bringing the Ravens to the top seed of the American Football Conference (AFC).

With contributions and success like that, Lamar Jackson became the second unanimous Most Valuable Player (MVP) and the fourth African-American quarterback to win the award. He followed up his MVP campaign by becoming the first quarterback to have multiple 1,000 yards rushing seasons and led the Ravens to a third consecutive playoff appearance.

Recently, he revealed that he has increased his muscle mass ahead of the NFL season. That has made his fans curious about Lamar Jackson’s weight gain.

Previously, we touched on the weight gain efforts of Danielle Busby and Kirsten Storms.

Lamar Jackson had a significant weight gain of about 12 to 15 pounds before the last year of his rookie contract.

So, Lamar Jackson is quite jacked up. He has always been a big dude so, the recent weight gain was not that noticeable in him. But then he confirmed it himself that he has bulked up his muscles.  He made a revelation that he added 12 to 15 pounds of muscle mass this offseason. Just as he was heading into the last year of his rookie contract, it appears that he spent the offseason building himself more.

Though the football player looks just a slight jacked, he has increased quite a lot of muscle mass. And because fans cannot see the weight gain but know of it, they are curious about things like how much did Lamar Jackson weigh before and how much does he weigh now.

To answer that question, Lamar Jackson said during that mandatory Ravens’ minicamp that he usually (before the weight gain) played at somewhere between 205 and 208 pounds, whereas now he’s going to playing this season at 220 pounds. He also shared the reason why he worked on building his muscle mass further.

I just wanted to do it. See how I look, see how I feel. And I feel good.

He did recently become the owner of a soul food restaurant in his native Florida but for his weight gain, it looks like there has not been just eating but a lot of training going on along with the eating to add the muscle mass.

Lamar Jackson has been training under the supervision of Emonee Spence, a Broward/Dade County personal trainer who goes by SpenceFit. They must have hit it off because Spence was a reserve wide receiver at Louisville and they both hail from Broward County. If not those reasons, then for other reasons and we can tell because the muscles weight gain is really impressive.

Physically, he looks imposing. This is a game built for big, strong, fast men. I think he’s checking three of those boxes right now.

Despite the weight gain and increase of muscle mass, the Baltimore Ravens hasn’t lost his signature speed but the way he passes seems to have changed a bit for the best. It is clear to all fans how he had more zip on his passes when he reported to Ravens minicamp because he had always had really strong arms. But now, the ball is leaving his hand in a different way altogether.

But all that change in the way he passes cannot be credited to that muscle mass weight gain. Lamar Jackson also went to work with 3DQB throwing mechanics coach/trainer Adam Dedeaux again this offseason, which can explain the way he passes. Coach Urban said,

The fundamentals look really good right now. He’s been impressive these three days. He’s clearly been throwing, he’s clearly been working. The strength sure doesn’t hurt that. The velocity, the tight spirals, those things, they look good.

Lamar Jackson seems to have that weight gain because he was trying to bounce back from a trying 2021 campaign. As a player who was the 32nd overall pick in 2018’s NFL draft, people had high hopes for him, and a lot was expected from him. He had set the bar high very early in his career as the unanimous NFL MVP in 2019.

But last season had not gone as he had hoped. The Ravens did win five of their first six games but after that, things went downhill. The Ravens’ offense had to deal with an influx of injuries on both sides of the place that led the team to a third-place finish in the AFC North. And as if that was not enough, Jackson sustained a bone bruise due to which he had to miss the last four games of the season.

Now, he already has his eyes set on getting back to his unanimous MVP season form. He looks forward to the season,

Did Marilyn Monroe Ever Meet Her Father? Did The Actress Know About Charles Stanley Gifford? Read More