Tom Kerridge’s Weight Loss: Did the Chef Have Surgery to Lose 12 Stones? Check Out His Dopamine Diet and Recipe Books of His Diet Plan! 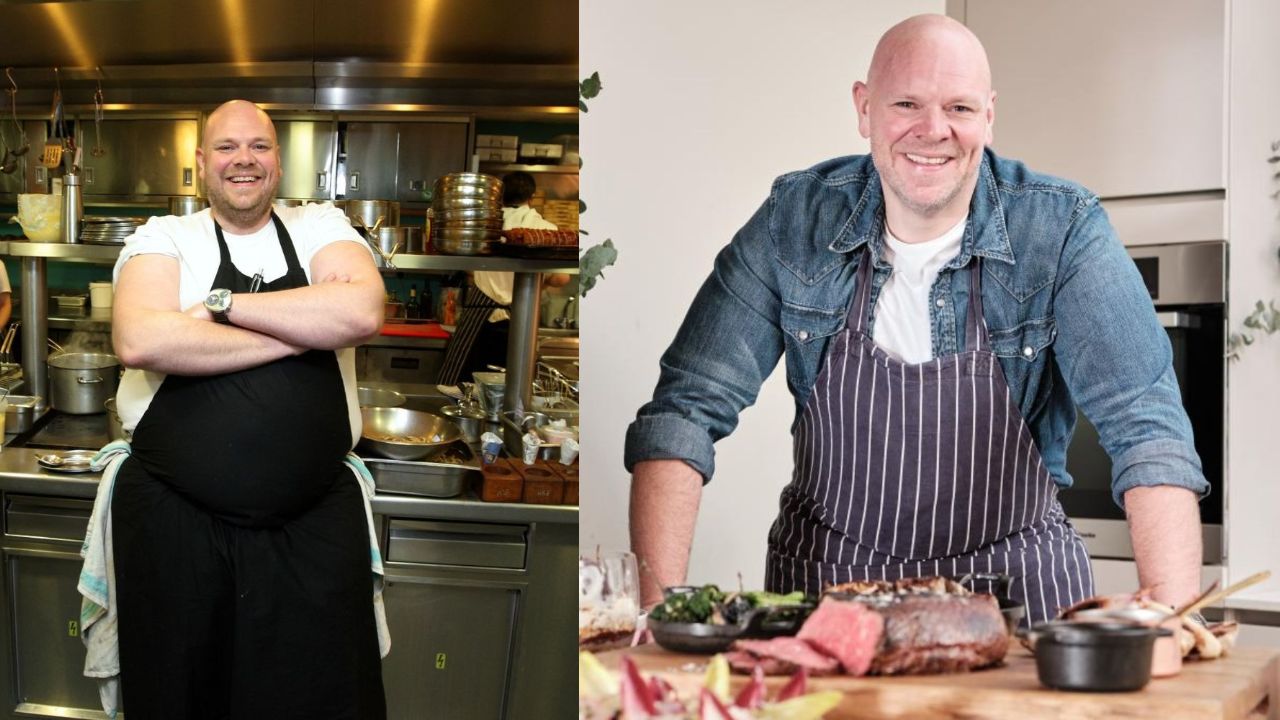 Tom Kerridge underwent a weight loss of 12 stones in his 40s after he was diagnosed obese at 30 stones and he realized that he could not continue like that if he wanted to see his son grow up. The chef created a way to lose weight and love the food he ate at the same time by creating a dopamine diet recipe. He even published a book about it. He also cut off alcohol and added protein to his diet. Tom Kerridge’s workout includes swimming which also helped a lot in his weight loss.

Tom Kerridge is an English Michelin-starred chef and cookbook author who frequently appears on television shows to talk about his recipes. Having attended culinary school at the age of 18, he went on to work at a variety of British restaurants, including the Michelin-starred Rhodes in the Square and Adlards. In 2005, he opened his first pub The Hand & Flowers with his wife Beth Cullen-Kerridge and within a year of that, he gained his first Michelin star.

He won another Michelin star in 2012. It was the first time a pub had done that – win two Michelin stars. Tom later opened a second pub in Marlow, The Coach, which also won a Micheline star. He has also opened The Butcher’s Tap (butchers and pub under one roof). In 2018, he opened his first London restaurant at Corinthia Hotel London.

As a chef, Tom Kerridge has made appearances on The Great British Menu, MasterChef, and Saturday Kitchen, and recently fronted his own series How to Lose Weight for Good and Top of the Shop for BBC. He has presented Bake Off: Crème de la Crème. And currently, he is presenting Food and Drink for BBC Two.

In all the years people have known him, the cook’s appearance has changed drastically. He has gone from being incredibly fat and big to being incredibly fit after an impressive weight loss transformation. He has even written books about it and made some recipes for food that help to lose weight. Many think that he has had surgery but he is more of a dopamine diet plan kind of guy. Here are all the details about Tom Kerridge’s weight loss!

There are more interesting weight loss stories of Emily Canham and Adele you might want to read.

Tom Kerridge’s Weight Loss: The Chef Created His Own Dopamine Diet Recipe and Wrote a Book About It; He Did Not Have Surgery!

Tom Kerridge (@cheftomkerridge) underwent one of the most impressive physical transformations when he had a weight loss of 12 stones. He really lost half his weight when he went from being 30 stones to 12 stones. He used to struggle with his appearance when he was bigger but things have changed for him and he has been very open about the whole thing. He has spoken candidly about all the diet plans and shared the dopamine diet recipes and even written a book about how to lose weight.

Tom Kerridge was very self-aware when he made a revelation that his job as a chef was one of the main reasons that he gained a lot of weight earlier in his life. He said that he used to graze and snack throughout service and he would skip breakfast altogether and have cheese on toast and packets of crisps for lunch because they were quick. No wonder he ballooned up and got diagnosed as obese. But as he approached his 40s, he understood that he needed to have a weight loss and a change in his lifestyle.

The chef explained in an interview that if humans lived up to be 80, then he was halfway there and he would never make it there if he went on the way he did. He decided that he had to do something about it. His wife sculptor Beth Cullen-Kerridge and his son motivated him to change himself. They had his baby boy Acey in 2015 and he wanted to be there when his baby boy grew up. And that could only happen if he got healthier and fitter. So, he got started on his weight loss journey.

How did Tom Kerridge undergo such an impressive weight loss transformation? Many think that he had surgery because his transformation was very dramatic but did he really? He has only opened up about his diet plan and even shared his dopamine diet recipes. He has also even written a book about how to lose weight. He also shared his workout routines. Let’s go over some of the things he did to have weight loss!

One thing Tom Kerridge did that made a significant impact was cut off drinking. He began to cut alcohol from his diet when he started his weight loss journey. It was not that he thought that he drank a lot of alcohol because if anyone asked him if he was an alcoholic, he wouldn’t know what to say. But cutting that out was more about mental strength in knowing what he wanted to do and getting on with it. He had an addictive personality but he channeled all that old drinking energy into work and did his best.

He also had one of the most unique diet plans in place to have that weight loss. Tom Kerridge realized that it was impossible to lose weight and keep the weight off for good if you don’t enjoy what you’re eating so, he started making low-calorie dishes people will want to eat every day. He said that the NHS offered really sound advice about how to lose weight so, he took that starting point for creating low-calorie delicious dishes he called the dopamine diet.

Dopamine is increased by dairy foods such as milk, cheese, and yogurt, and unprocessed meats like beef, chicken, turkey, fatty fish, eggs, fruit, vegetables, nuts, and dark chocolate. Alcohol, caffeine, and processed sugar are to be avoided. Tom Kerridge created a dopamine diet recipe with this in mind. He said that the cooking techniques for the dopamine diet meant there was no compromise on flavor and that you’re promised a generous plate of food.

The dopamine diet helps people in losing weight while still loving the food they eat as it increases levels of the happy hormone dopamine in the brain while helping to lose weight at the same time. So, he created and credited the dopamine diet for his weight loss. He even published a recipe book based on his personal food journey in 2017. The recipe book is titled Tom Kerridge’s Dopamine Diet: My Low-carb, Stay-happy Way to Lose Weight.

Not only did he include only what he loved in what he ate, but he also cut off a few things. He gave up on snacking too much because his snacks were heavy. And he instead made up for that by eating hearty breakfast every day that included overnight oats or omelets. He also added foods high in protein to his diet and stuck to healthy ingredients such as vegetables, tinned beans, and eggs. He cut sugar from his diet but he made sure to stress that some treats once in a while never hurt the weight loss.

Tom Kerridge said that there was nothing wrong with a flapjack in the afternoon when you get that 4 pm lull if everything else was in place. He has continued to eat full-fat cheese, milk, yogurt, and double cream while cooking. He calls those foods his ‘dopamine heroes’ because they make him happy and they help him in weight loss

Now, that’s his diet plan and dopamine diet and recipe books for weight loss. It was not all. He also did workouts and exercises to get leaner. He mostly did swimming than other things. He said that after the alarm wakes him up at 6:15  every morning, he goes to the swimming pool at a hotel up the road, and depending on whether it’s a busy day or not, he sometimes swims a kilometer or sometimes a mile.

Tom Kerridge said it was a big deal for him to get into the swimming pool at the beginning of his weight loss journey because of how big it was. He felt it was a big step especially because he was very conscious of his body and he worried about it.

It’s not just going to the gym where you’ve got clothes on, you’re just walking around in your pants essentially. Swimming is very good because you become isolated. No one can talk to you, your phone doesn’t ring. You’re on your own.

Though he felt self-conscious, Tom Kerridge persevered, and good for him because he finally underwent an impressive weight loss which was his goal.