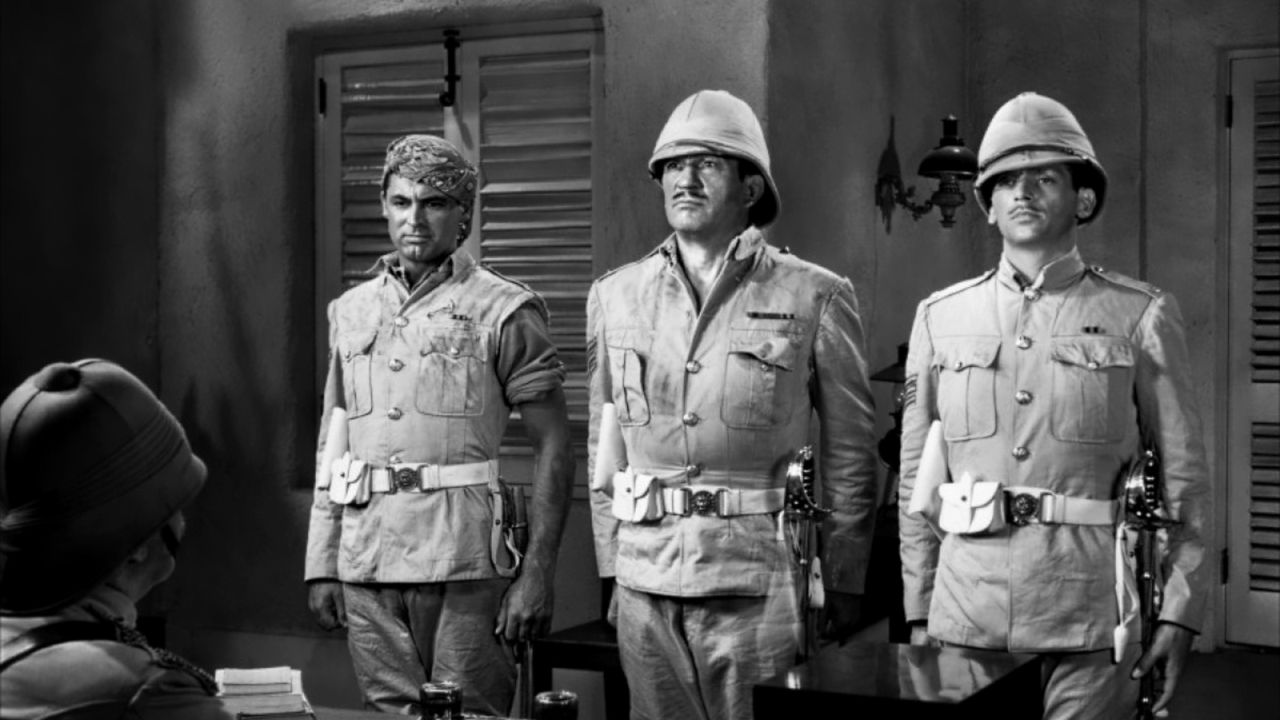 The movie was selected for preservation in the National Film Registry in 1999 after being deemed “culturally, historically, or aesthetically significant” by the United States Library of Congress. It is currently being streamed on Prime Video.

Previously, we touched on the filming locations of Unsellable Houses and Simply Giada.

Where was the Movie Gunga Din Filmed?

Despite the fact that the movie was meant to take place in the Khyber Pass region, the whole film was shot in Lone Pine at Alabama Hills and the nearby locations.

According to the Museum of Western Film History webpage, the film’s creators were encouraged in portraying the Khyber Pass area by the narrow sections of the Lone Pine.

The plaque in the Alabama Hills region confirms that the site was definitely chosen for the production of the 1939 film Gunga Din. According to the inscription,

In 1938, this hill area, among many others in these Alabama Hills, served as a stand-in for the hill country of northern India when RKO made the classic adventure film, ‘Gunga Din,’ on location in Lone Pine. Hundreds of horsemen raced across the hills and elaborate sets were built here and nearby while the cast and crew lived for weeks in a tent city off Movie Road. Directed by George Stevens, the epic starred Cary Grant, Douglas Fairbanks Jr., Victor McLaglen and Joan Fontaine with Sam Jaffe as Gunga Din, the waterboy who wanted so much to be a soldier.

The sergeants are sent on an important assignment to inspect an outpost whose telegraph wires have been disconnected. Among their group is Gunga Din (Sam Jaffe), an Indian water-bearer who desires to be a British soldier.

Their party is attacked at the outpost by native thugs who are members of a deadly religious group. Din later takes the treasure-seeking Cutter to a golden-roofed temple, which turns out to be the cult’s sanctuary.

When Cutter is imprisoned, Din sends MacChesney and Ballantine to his rescue. The three, however, discover a surprise waiting for them at the shrine and are captured.

They find that the thugs aim to attack their regiment when it comes to looking for them. Din, who has been injured in a fight, courageously blows a bugle to alert approaching British forces of the danger.

Gunga Din is shot and murdered, but he is promoted to corporal afterward. The troops ultimately pay him a belated homage in the final scene, as a colonel at Din’s burial delivers Kipling’s famous concluding lines of his poem.

Howard Hawks was supposed to direct Gunga Din, but he stepped out while working on Bringing Up Baby (1938). Ben Hecht and Charles MacArthur, noted for their collaborations wrote the film’s plot.

The story was remade as the 1962 western Sergeants 3 by director John Sturges (an uncredited film editor for Gunga Din).