Hilary Duff’s Plastic Surgery: Take a Look At The Actress’ Pictures Before and After Veneers! 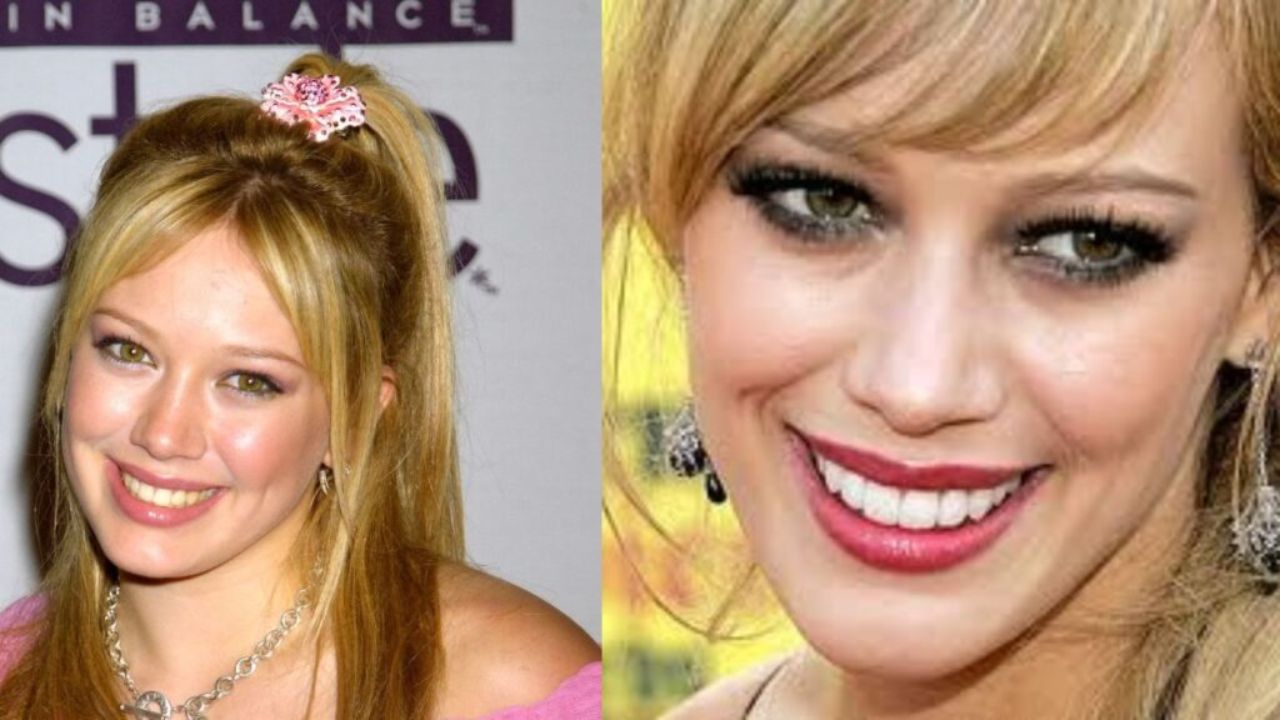 Hilary Duff has been plagued with the speculation of plastic surgery for a long time which recently saw a boost following her new sitcom How I Met Your Father. The actress hasn’t responded to those rumors recently but back in 2014, she had denied having lip fillers. Hilary Duff has also never confirmed other plastic surgery like a nose job, breast implants, and BBL. However, veneers she has confirmed and fans often seek pictures of Hilary Duff before and after veneers.

Hilary Duff is an American actress, singer, and author who gained prominence when she starred as the titular character in the television series Lizzie McGuire. With that role, she quickly earned the label of a teen idol and carved out a space for herself in pop culture. She also did a movie based on the series The Lizzie McGuire Movie. She has won seven Nickelodeon Kids’ Choice Awards, four Teen Choice Awards, and two Young Artist Awards.

Hilary Duff has also appeared in mainstream movies and independent movies where she played a wider range of adult-themed roles. Not only acting, but she also did music and enjoyed commercial success with her five albums. She has sold an estimated 15 million records worldwide.

Besides those, the actress has also co-authored a trilogy of novels, Elixir (a New York Times bestseller), Devoted and True. She has also ventured into the fashion industry with her own fashion lines such as Stuff by Hilary Duff and Femme for DKNY. She has also invested in a number of businesses ranging from cosmetics to children’s products.

Hilary Duff recently appeared in How I Met Your Father which has sparked again the speculations of plastic surgery that have hounded her for a long time. But has she admitted to or denied plastic surgery?

Previously, we touched on the plastic surgery efforts of Natasha Lyonne and Rebel Wilson.

Hilary Duff (@hilaryduff) has been rumored to have undergone all sorts of plastic surgery including rhinoplasty, lip injections, boob job, and BBL, some of which she denied once back in 2014.

Ever since Hilary Duff regained prominence after How I Met Your Father aired, she has been battling plastic surgery rumors like she used to have to do before. In fact, maybe she even resents all the attention coming her way due to the project because of how it has increased the level of public scrutiny she usually gets from the public. Based on the rumors that generate after, we can also tell how people have been inspecting her looks more closely than before.

Do people think they are showering Hilary Duff with appropriate and charming compliments when they call her ever young beauty? A lot of media outlets have also started to refer to her as a beauty with an age-defying complexion, which could be considered flattering praise for somebody old. But she is just 34 and she is started to be treated as if ancient with comments like evergreen beauty.

Also, it is very clear from the way people speak about Hilary Duff that her appearance (where she’s looking her age, which is 34 and not old, but who’s gonna tell them) has come as a shock to them. They probably expected a wrinkled old lady to show up in place of Hilary. Upon seeing that they could still recognize that she is Lizzie McGuire, they were immediately like, that is not possible (for her to look that ‘young’), she must have had plastic surgery. Their minds quickly went to that.

And thus began another round of plastic surgery speculations where people made guesswork about what kind of cosmetic procedures she has gotten. Botox and cheek fillers made it to the list of plastic surgery rumors. Also, who can forget how there had been rumors back that she had it all- lip fillers, rhinoplasty, boob job, and BBL because I bet she can’t? And she must have been reminded of those days and how she is not very young anymore.

Hilary Duff has certainly become aware (painfully) of the fact that she is not very young now but even then, she must realize that the comments like her being an ageless beauty are too much and back-handed compliments designed to make her feel older than she is.

Anyway, however she feels, we can’t say for sure as she hasn’t made any response to such ‘praises’ of her evergreen beauty at the age of 34. But, in response to a publication that published the story of her getting lip fillers, she called it out and tweeted her denial,

“…know u need stores, in this case, its just red lipstick and a fancy angle.”

As for the other plastic surgery, she not so subtly put them down when in an interview with The New York Times, she credited her timeless appearance to an extensive beauty routine that consisted of a skincare regimen crafted under the supervision of a dermatologist Dr. Harold Lancer with expensive creams and oils collectively worth $1244.  She also shared that she puts on face masks frequently.

The only plastic surgery that need not be guessed at and she herself has confirmed is the cosmetic dental surgery she had for teeth i.e. veneers. She went through with the procedure and got the porcelain veneers on her teeth because she had always been chipping her teeth on microphones so she made her teeth whiter, larger, and more symmetrical along the bottom edges, which could not be missed. Her new teeth were called horse’s teeth which caused her to file them down.